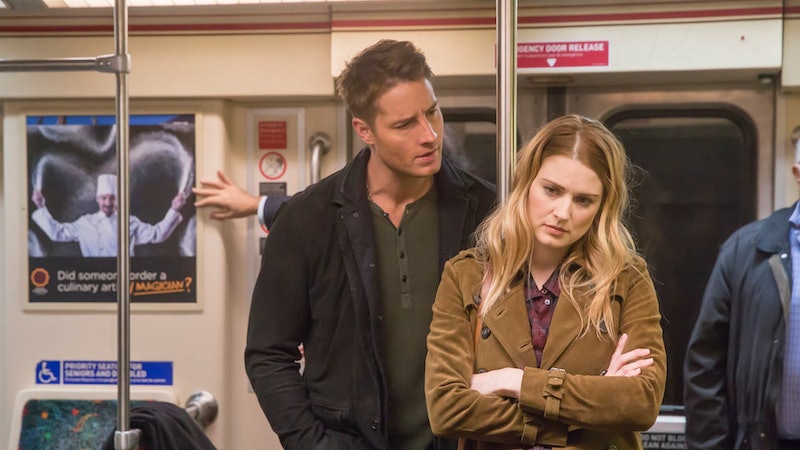 Spoilers ahead for This Is Us Season 3, Episode 16. Kevin's childhood love could be coming back into his life for good, because Sophie's back on This Is Us just as Kevin's future with Zoe has started to get shaky. On Tuesday's episode, Zoe and Kevin go to couples therapy to address some of the issues that have come up since Kevin relapsed. Through that process, Zoe finds out that Kevin wants to have kids with her — and she never wants to have kids. Kevin's left forced to make a choice between a woman he loves and being a dad one day, and, in trying to decide what he wants, he finds himself standing outside his ex-wife Sophie's house. Knowing this series, it's entirely possible this means Sophie and Kevin get back together on This Is Us. Maybe.

The last time fans saw Sophie, Kevin was telling her that a possible future with her was a "nightmare" to him. Viewers knew the context, which was that Kevin, in the throws of addiction, had literal nightmares about being a terrible husband and father. "I don’t know how to be a husband to you," Kevin told a stunned Sophie. "I don’t know how to be a father to our kids. I don’t. I don’t have anything to give you. There’s nothing inside of me to give to you, OK? I don’t have anything. I’m an empty shell."

Essentially, he broke up with Sophie more because he was not in a good place — not because he didn't love her. He's not necessarily in a good place now, either, considering that he's only four days sober. But he does seem to have a little better grasp on life this time around.

But, if Sophie and Kevin are destined for each other as the episode hinted with that school dance/first kiss flashback and Sophie agreeing to get coffee with him in the present timeline, it's certainly not going to happen anytime soon. First of all, next week's episode doesn't reference Kevin at all. The episode synopsis on the press site says the episode is called "R & B" and is "a history of Beth and Randall through the ages." Not a lot of room for Kevin and Sophie to figure out their stuff.

Plus, at the moment, both of them are in other relationships. Sophie's actually engaged to a kindergarten teacher and Kevin ultimately chose Zoe over having kids. Since Sophie and Kevin's marriage ended because he cheated on her, don't expect cheating on their current significant others to come into play for their reunion. No, fans will have to wait for both relationships to run their course for Kevin and Sophie to have any chance at reuniting.

Sophie's relationship feels pretty solid, but maybe her fiancé will see that Kevin gifted them Billy Joel tickets and he'll get jealous and end things? And Kevin may have chosen Zoe, but giving up your desire to have children is a big thing that Zoe already thought a lot about. For Kevin to have made that decision in like, a day. doesn't bode well. It sort of feels like this relationship is a ticking time bomb.

But even with obstacles in their way, you may be able to safely root for Kevin and Sophie's own happily ever after. After all, show creator Dan Fogelman told Us Weekly ahead of Season 3, "I would not count Sophie out at all." And Alexandra Breckenridge, who plays Sophie, told Cosmopolitan during Season 2 that she was team Kophie (Sevin?) for endgame. "Kevin and Sophie, they’ve loved each other since they were kids. They’ve been off and on since they were children. I think that eventually it’s gonna work out for them, or at least I hope it does. I think they have a bond that’s kind of unbreakable."

There may not be an immediate reunion, but the signs are there that Sophie and Kevin aren't over yet. Maybe the third time they try to be together will be the charm?