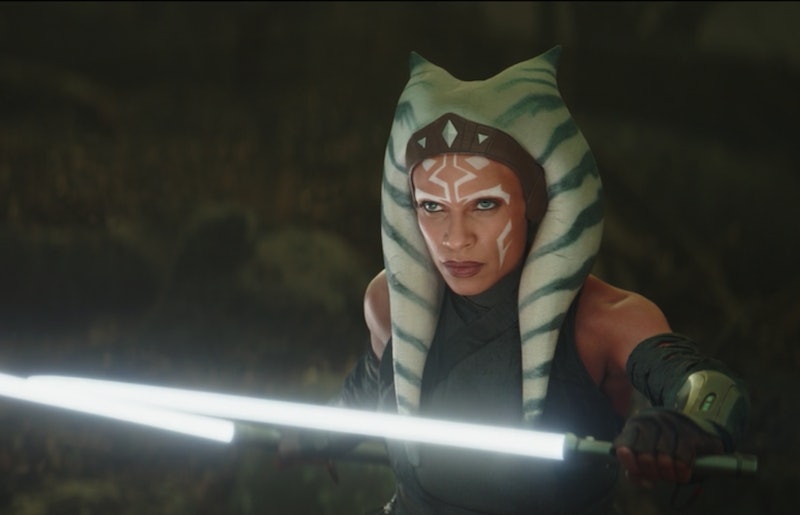 Spoilers ahead for The Mandalorian Chapter 13. Mando has been searching for the Jedi all season, and in The Mandalorian Chapter 13 he finally meets Anakin Skywalker's former apprentice, Ahsoka Tano (Rosario Dawson). Though Ahsoka declines to train the Child (whose real name is Grogu), she does finally explain his backstory, and reveals an exciting mission of her own. She's on the hunt for Grand Admiral Thrawn, a central villain from the animated Star Wars Rebels series.

For those unfamiliar with the character, Thrawn was a brilliant and ruthless Imperial strategist. He was first introduced in Timothy Zahn's novel Heir to the Empire, the first in a trilogy. Hailing from a secretive and isolationist empire on the outermost reaches of the galaxy, Thrawn joined the Empire and eventually worked his way up to Grand Admiral. His knowledge is what made him terrifying; he would study the history, art, and philosophy of his enemies so he could manipulate and destroy them.

Per Polygon, Zahn's original Thrawn books were eventually struck from canon when Disney bought the Star Wars franchise, but Thrawn was reintroduced in Star Wars Rebels as the heroes' main antagonist. (Zahn also penned new Thrawn books.) In the Rebels finale, Thrawn faced off against Force-user and Rebels protagonist Ezra Bridger. Ezra broke onto Thrawn's ship, the Chimaera, and attacked his fleet using purril, giant tentacle creatures that can hyperspace travel. In the final moments of the show, the purrgil teleported the Chimaera away, and both Thrawn and Ezra disappeared. The series ended with Ahsoka teaming up with Mandalorian warrior Sabine Wren to hopefully find Ezra somewhere out in the galaxy.

Based on Ahsoka's reference in The Mandalorian, we can assume that Thrawn survived the deep space jump. It's likely he's still an active Imperial leader, as his cruel apprentice, Magistrate Morgan Elsbeth, was unwilling to divulge his location. While this doesn't really tell us much about what Thrawn is up to, it does tease the possibility of an eventual cameo — his first live action debut, just like Ahsoka. It would also be unsurprising if Mando ends up crossing paths with Thrawn before Ahsoka finds him. The Empire's shady experiments have apparently stalled until they can get more of Grogu's blood, and if there's anyone clever enough to track Mando, it's Thrawn.

More importantly, if Thrawn survived, Ezra likely did too. This is probably the most intriguing connection to Mando and Grogu's journey. Ahsoka refused to train Grogu because she feared that his emotional attachment to Mando could eventually turn him into another Darth Vader. But she did suggest they travel to the Jedi planet of Tython and try to reach out to another Jedi using the seeing stone. If Ezra is alive, is it possible that Ezra will hear Grogu and eventually mentor him? It's an exciting prospect for a show that initially shied away from Jedi entirely in its first season.

Of course, fans have floated the names of other possible Jedi who could train Grogu. Quinlan Vos, Coleman Kcaj, and Oppo Rancisis were all Jedi Masters who survived Order 66, which purged the Jedi. Others have suggested Samuel L. Jackson's Mace Windu, whose death was never really shown onscreen in the films. Some have even suggested Cal Kestis, the playable character in the game Star Wars Jedi: Fallen Order. And The Mandalorian takes place about five years after the original trilogy, meaning Luke and Leia are somewhere out there too.

These are all intriguing possibilities, but Mandalorian is pretty consistent about introducing characters it mentions episodes before. At this point, it feels pretty likely that Ahsoka will appear again this season, and both Thrawn and Ezra will cameo in some way. Regardless of how it happens, it looks like Mando's clan of two will get a whole lot bigger.

More like this
Louisa Harland’s New Show Is A Far Cry From Derry Girls
By Frances Stewart
The 'Andor' Timeline, Explained
By Gretchen Smail
Spencer Matthews Will Search For His Brother In A New Disney+ Doc
By Darshita Goyal
'Firefly Lane' Season 2 Will Be The Show's Last — But There's A Twist
By K.W. Colyard and Grace Wehniainen
Get Even More From Bustle — Sign Up For The Newsletter