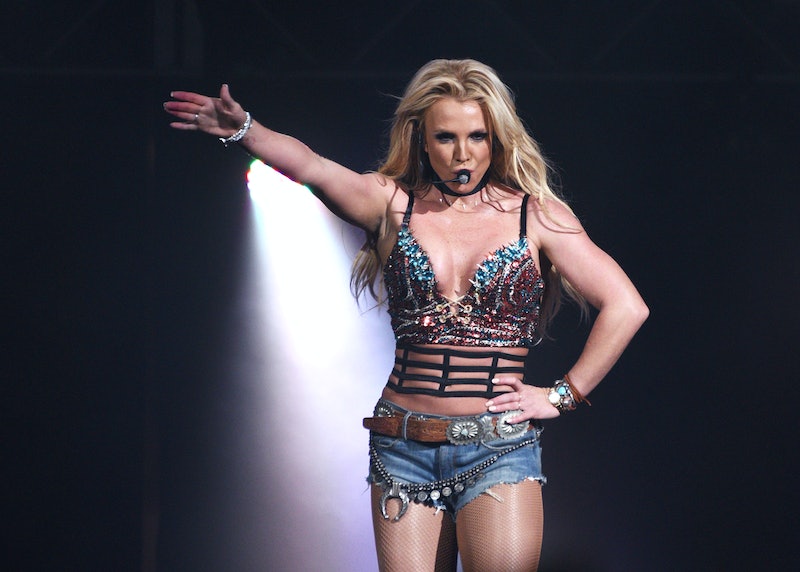 Since 2008, Britney Spears has been under a legally mandated conservatorship that grants her father, Jamie, and a co-conservator control of her business and financial decisions. Until 2019, that co-conservator was attorney Andrew Wallet.

Though Wallet stepped down as co-conservator on March 4, 2019, questions surrounding his role have persisted. According to MTV, Britney's attorney Adam Streisand claimed at the time the conservatorship was put in place that Wallet didn't have the expertise to manage Britney's then-$40 million estate, which encompassed 15 separate entities. In Oct. 15, 2018 court affidavits, Wallet countered that he was instrumental in bringing “stability and leadership” to Britney's career. He claimed that he kept “literally hundreds of people” in check — including vendors, dancers, and hair stylists — who he alleged could have “brought financial disaster" to Britney by derailing her rehabilitation efforts.

He also argued that since he became co-conservator, Britney's estate had increased by $20 million. “At the beginning of the conservatorship, the estate was nearly out of fund and cash equivalents,” Wallet said in the affidavit. “The problems were of epic proportions over a period of years. Extraordinary skills have been employed by all in order to achieve the results enjoyed at the present time.”

As a result, Wallet asked that he be compensated $426,000 a year. It's this detail that supporters of the #FreeBritney movement have claimed as evidence that Wallet is exploiting Britney for financial gain. Though California law allows conservators to collect “reasonable” compensation, Britney's Gram podcast host Tess Barker told Vanity Fair that such a huge raise felt suspicious. “It didn’t seem that being someone’s conservator should be a for-profit position," Barker said.

In January 2019, Spears canceled her Las Vegas residency and announced an “indefinite work hiatus." This led to Wallet suddenly resigning from his position. According to US Weekly, Wallet did not provide a specific reason for his resignation, but said in court filings that he wanted to be removed as quickly as possible. He wrote that the "conservatorship is engaged in numerous ongoing business activities requiring immediate attention,” so it made sense for Britney to immediately accept his resignation.

This all came to a head on Aug. 17, 2020, when Britney asked the courts to permanently remove Jamie as conservator. She wanted Montgomery to be installed as guardian of her personal and health decisions, and a “qualified corporate fiduciary” to manage her estate. The next day, Jamie petitioned to bring Wallet back on as a co-conservator. Britney's lawyers opposed this move, calling Wallet “uniquely unsuitable” for the role. According to court filings, Britney said she would not be able to afford Wallet, as she has "no desire" to perform again at this time.

Jamie quietly withdrew the petition to reappoint Wallet in October 2020. In an Oct. 5 Daily Mail article, Wallet then accused the #FreeBritney campaign of "complicating matters" when they "don't have a clue" about the conservatorship. "Britney to this day does not have the capacity to sign documents and make decisions for herself," he said. "Protecting her assets is very important and for that the conservatorship has to stay in place because she is susceptible to undue influences." He added that she could potentially be in a conservatorship for the rest of her life.

Wallet also denied rumors that he was exploiting Britney or stealing extra money. "What I was paid was more than fair for what I was asked to do," he said. According to court documents, he was given a $100,000 payment as part of his resignation agreement on top of his $426,000 yearly salary. "In that world, professionals doing what I was doing would be getting over $1 million a year."

More like this
The Britney Spears Disney Princess Musical Is Finally Opening On Broadway
By Jake Viswanath
The 'Love, Lizzo' Harry Styles Scene Is Just 1 Moment That Made Fans Feel Seen
By Brad Witter
Mariah Carey Is "So Proud" After Her Kids Joined Her In The Thanksgiving Day Parade
By Stephanie Topacio Long
Kim K Is Putting Kanye’s Memorabilia — Like Grammys & Clothes — In A Vault
By Jake Viswanath
Get Even More From Bustle — Sign Up For The Newsletter