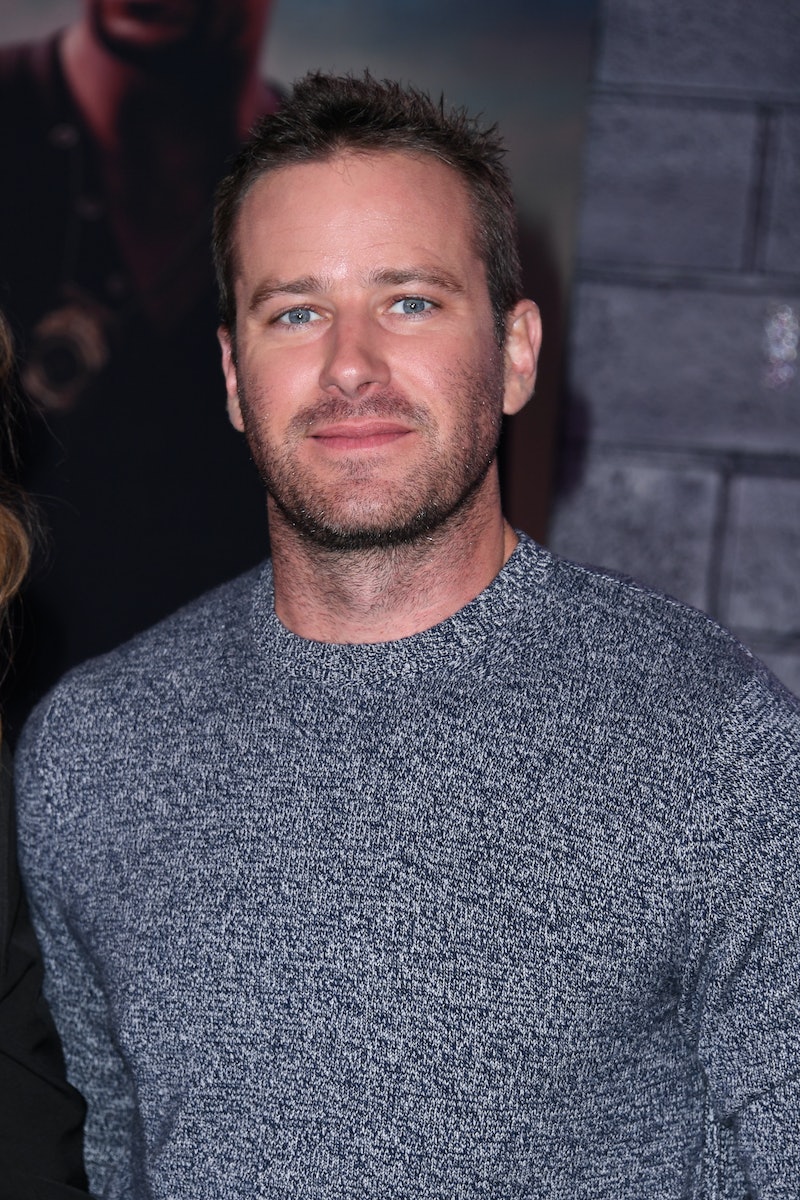 It's been 10 years since Armie Hammer broke out in the film world by starring as both Winklevoss twins in David Fincher's The Social Network. And during that 10-year span, Hammer was married to TV personality and entrepreneur Elizabeth Chambers. But the news broke in late summer 2020 that Hammer and Chambers were calling it quits. Since their split, Hammer has gone out into the desert to hang with his friend, done some "crisis therapy," and gotten physical with a construction project. But Hammer's also been seen out on some dates lately — mostly with Rumer Willis.

Romance and mystery seem to be a theme for Hammer at the moment. His latest film, Rebecca, hit Netflix on Oct. 21 and co-stars Lily James. Directed by Ben Wheatley, the film is an adaptation of the novel of the same name by Daphne du Maurier. James stars as a young woman who finds herself living in the shadow of her new husband's dead first wife, the titular Rebecca. Hammer plays the charismatic husband, Maxim de Winter, while Kristen Scott Thomas also co-stars as the prying housekeeper Mrs. Danvers. Mr. de Winter seems keen to move on from his previous marriage. Is Hammer?

As People reported, Chambers filed for divorce from Hammer in July after a decade of marriage. The couple has two kids, daughter Harper Grace, 5, and son Ford Douglas Armand, 3. They made joint social media statements saying, "Thirteen years as best friends, soulmates, partners and then parents. It has been an incredible journey, but together, we’ve decided to turn the page and move on from our marriage."

Prior to their separation, the couple had been quarantined in the Cayman Islands for months. As Hammer told GQ in August, they were traveling with their two kids, visiting Hammer's father and wife, when the country suddenly went under intense lockdown. "The experience sucked so badly. The island itself handled the situation really efficiently, but they also handled it in a really intense way. It was a very draconian lockdown. They wouldn’t fly anywhere, or at least not to America. Everything was closed. I mean, everything."

It seems the lockdown proved difficult for the star. "It was a very complicated, intense situation, with big personalities all locked in a little tiny place," Hammer continued. "It was tough, man. I’d never dealt with anything like that before in my life, so I didn’t have the tools. It was just this thing that snuck up on everybody. I don’t think I handled it very well. I think, to be quite frank, I came very close to completely losing my mind."

Back in the States, Hammer was soon spotted having dinner with Jessica Ciencin Henriquez, the ex-wife of actor Josh Lucas. (Things apparently ended badly between the pair, as Henriquez reportedly revealed that she blocked the actor on social media in a since-deleted tweet.) Days later, Hammer was out with Willis, the daughter of Bruce Willis and Demi Moore. As Extra described, "Hammer was spotted wrapping his arms around Willis’ waist during a walk in Los Angeles."

Relatedly, a source told Entertainment Tonight, "They seemed happy and very familiar with one another. They blended in with their masks on, and had their arms around each other closely while walking." But after being spotted with Willis, Hammer was also reportedly spotted with Flashd CEO Courtney Vucekovich. And according to Page Six, the two "were living together in the California desert this summer after he appeared in several of her Instagram photos."

But as another source told E!, "[Hammer] isn't dating or in a relationship with anyone. He and his ex were together since his early 20s so he isn't looking for a relationship now." So it sounds like the rumors of relationships with these women are just that, and this divorced dad is just getting back out there.

More like this
Here’s Everything Coming To & Leaving Netflix In February
By Jake Viswanath
Vanessa Hudgens Is Reportedly Engaged To Cole Tucker
By Jake Viswanath
Pamela Anderson’s Dating & Marriage History Could Be Its Own TV Series
By Jake Viswanath
Keke Palmer Shares The Sex Of Her & Darius Jackson's Baby
By Jake Viswanath
Get Even More From Bustle — Sign Up For The Newsletter
From hair trends to relationship advice, our daily newsletter has everything you need to sound like a person who’s on TikTok, even if you aren’t.