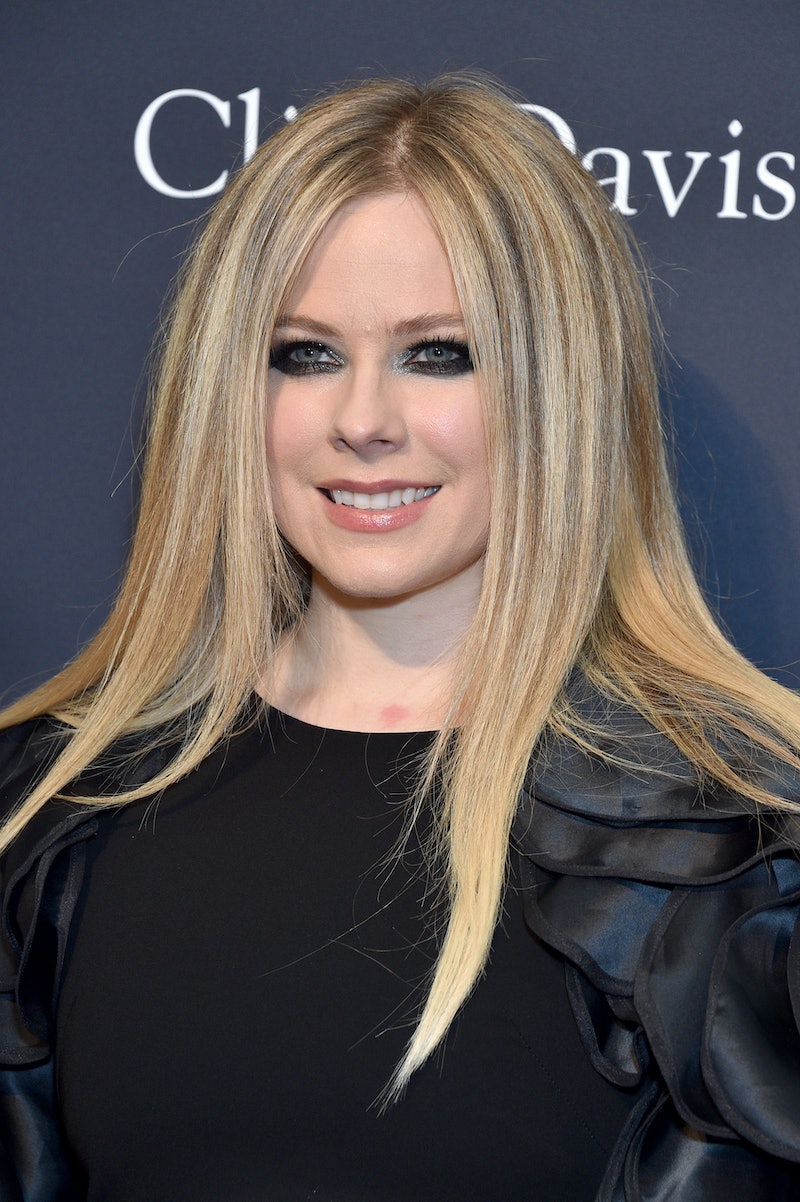 While the pair is yet to officially confirm their relationship, Avril Lavigne and alternative musician Mod Sun have recently been spotted hanging out together in Los Angeles, and a source told Entertainment Tonight that they're dating. To add fuel to the relationship fire, during a Feb. 7 outing at BOA Steakhouse in West Hollywood, TMZ noticed that Mod Sun got a fresh tattoo on the back of his neck — of the word "Avril." They may not have confirmed their couple status just yet, but nothing seems too complicated here.

Lavigne and Mod Sun first made their connection public in December 2020 by posting photos from a recording studio session to their Instagram pages. On Jan. 8, 2021, they dropped a collaborative single titled "Flames," which marked Lavigne's return to her signature pop-punk sound following her foray into Christian pop on her 2019 album Head Above Water. They've since shared more photos from the studio with Mod Sun's frequent collaborator Machine Gun Kelly, signaling more music to come from the reported couple.

Speaking to ET, the source that confirmed Lavigne and Mod Sun's relationship explained, "Avril has a history of falling for people that she works with. She falls in love with them for their musical creativity and expression." The source continued, "Avril and Mod Sun have been spending a ton of time together and getting to know each other better."

In a recent interview with Nylon, Mod Sun referred to Lavigne as "the ultimate queen" and detailed his fandom for the early aughts icon. "A lot of my [teenage] style was based off of her, too," the musician said. "I tell her this sh*t all the time. I fan out. I'll talk up your sh*t if you don't. I'll remind you how much of an icon you are."

This isn't Lavigne's first time falling for a fellow musician. She was married to Sum 41's Deryck Whibley from 2006 to 2009, and she then wed Nickelback's Chad Kroeger from 2012 to 2015. She was most recently linked to Phillip Sarofim, son of Egyptian-American billionaire Fayez Sarofim, until they reportedly split in November 2019. Mod Sun's relationship history includes a very public polyamorous relationship with influencer Tana Mongeau and actress Bella Thorne, and he was spotted cozying up to Demi Lovato in October 2020 following her split from fiancé Max Ehrich.

More like this
Michael B. Jordan Tackled His "Public Breakup" With Lori Harvey On 'SNL'
By Brad Witter
Who Is Pete Davidson Dating? He & Chase Sui Wonders Got Caught Kissing
By Jake Viswanath
Who Is Allison Williams Dating After Her Divorce? She’s Engaged With A Child
By Jake Viswanath
Linda Ronstadt’s “Long Long Time” Plays A Pivotal Role In The Last Of Us
By Brad Witter
Get Even More From Bustle — Sign Up For The Newsletter
From hair trends to relationship advice, our daily newsletter has everything you need to sound like a person who’s on TikTok, even if you aren’t.