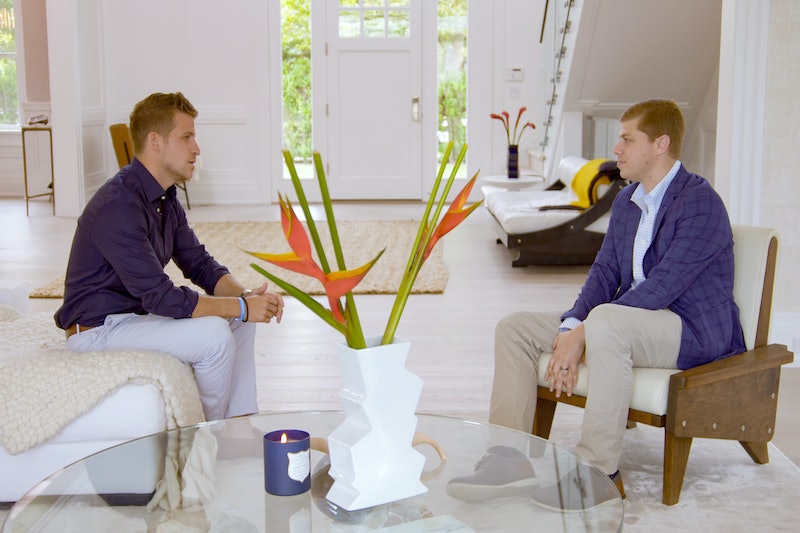 Based on all of his life mottos, it seems like Jimmy Giugliano from Million Dollar Beach House is less "work hard, play hard" and more "work hard, work hard." On the new Netflix real estate show, he says that unless people are eating, sleeping, and breathing real estate, it will be hard for them to make it in the competitive Hamptons market. And according to his Nest Seekers bio, he also lives by the Thomas Edison quote, "There is no substitute for hard work." Hey, Jimmy, life's not all about work!

As a born and raised Southamptonite, Jimmy loves what he does. So apparently for him, working in real estate is like playing. And he's really good at it. His Instagram bio proudly declares that he had the No. 1 and No. 3 biggest deals in the Hamptons last year; one of those even landed him a writeup in the New York Post. He represented a super-rich anonymous buyer who nabbed a mansion on the so-called "Billionaires Lane" of Southampton. The house sold for $35 million, which previously seemed like an impossible figure — especially to Jimmy's co-star Noel Roberts. On the show, Noel got ridiculed by a prospective buyer for listing a different home for the same $35 million figure.

When he's not hard at work in the Hamptons real estate market, Jimmy is a husband and father. In 2016, he married Kelsey Rocco, and earlier this year the duo welcomed their first child. They named him Rocco in honor of Kelsey's maiden name.

But while Jimmy's Instagram is a place where he occasionally posts photos of Kelsey, Rocco, and his dogs, he's never not hustling — so it's also a place where he posts his pricey home listings. He really wasn't kidding about the eating, sleeping, and breathing real estate thing.