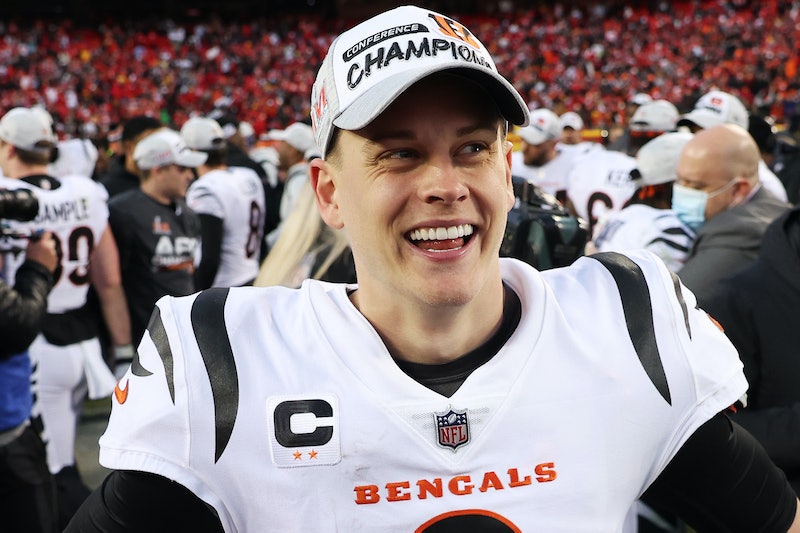 After 34 years of not making it to the Super Bowl, the Cincinnati Bengals head to the NFL’s championship on Sunday, Feb. 13, thanks in no small part to the team’s breakout star, quarterback Joe Burrow. With the Bengals set to face off against the LA Rams in a historic match, the team will have their fans’ full support.

One among the crowd is Burrow’s long-term girlfriend, Olivia Holzmacher. She’s been cheering Burrow on from the sidelines in different stadiums throughout his football career, a tradition she’s upheld since his university days. (Burrow did a three-year stint at Ohio State before switching teams and landing a $36 million contract with the Bengals in 2020.) Between working for a grocery conglomerate, Holzmacher finds time to “fangirl” over Burrow and isn’t afraid to show it. As the game gets underway, here’s everything you need to know about Holzmacher and how she’s supporting Burrow on Feb. 13.

Burrow and Holzmacher met when they were still undergrads at Ohio State University. Holzmacher studied Data Analytics from 2015 ’til she graduated in 2019, while Burrow attended and played football for the university from 2015 to 2018. When he didn’t get the starting quarterback position he was hoping for, he joined the Louisiana State University Tigers as the starting quarterback.

The couple has been together for five years, making their Instagram debut on Aug. 13, 2017. A year later, she posted a photo celebrating their anniversary with the caption, “Three hundred sixty five days xoxo.”

Holzmacher Has A Corporate Job

According to Holzmacher’s LinkedIn profile, she’s been working for The Kroger Company for the past three years as the Senior Process Specialist and Analyst, which entails building “dashboards and visualizations” for the grocery chain’s e-commerce services. Before that, she worked for a gym as a supervisor while she was in high school.

Despite having more than 65,000 Instagram followers, Holzmacher only has 66 posts, most of which are related to Burrow. Though they don’t all feature her athlete boyfriend, most of her Instagram photos are taken from stadium seats across America. She doesn’t shy away from fangirling either, often posting pictures wearing merchandise with Burrow’s name or the Bengals logo.

She even posts Stories of tailgating during football games featuring a koozie (orange, of course) with Burrow’s face to hold her White Claw and other drinks. “It’s tradition,” she joked in one. On Feb. 13, she pulled out the same koozie to mark the biggest game of the year.

In another Story for Super Bowl Sunday, she showed off team spirit with some fashionable (and yeah, uncomfortable) boots.

In 2019, she accompanied Burrow to New York to receive the prestigious Heisman Trophy, awarded to the most outstanding college football player. She posted a picture of them in their black-tie outfits with the caption, “I’m so proud of you! The best weekend ever!”

Aside from her love of her boyfriend and football, Holzmacher also shares photos with her friends and chronicles the life of her Goldendoodle, Beau, who even has his own Instagram Stories highlights.

More like this
Lewis Hamilton Turned Down A Role In 'Top Gun: Maverick' For This Surprising Reason
By Darshita Goyal
Harper Teasing David Beckham’s Dad Dancing Is Beyond Adorable
By Frances Stewart
17 Years Ago, 'Hannah Montana' Reportedly Almost Cast This 'Gossip Girl' Star
By Grace Wehniainen
'Grey’s Anatomy' Star Kevin McKidd Hinted How Ellen Pompeo’s Step Back Will Change Season 19
By Grace Wehniainen
Get Even More From Bustle — Sign Up For The Newsletter