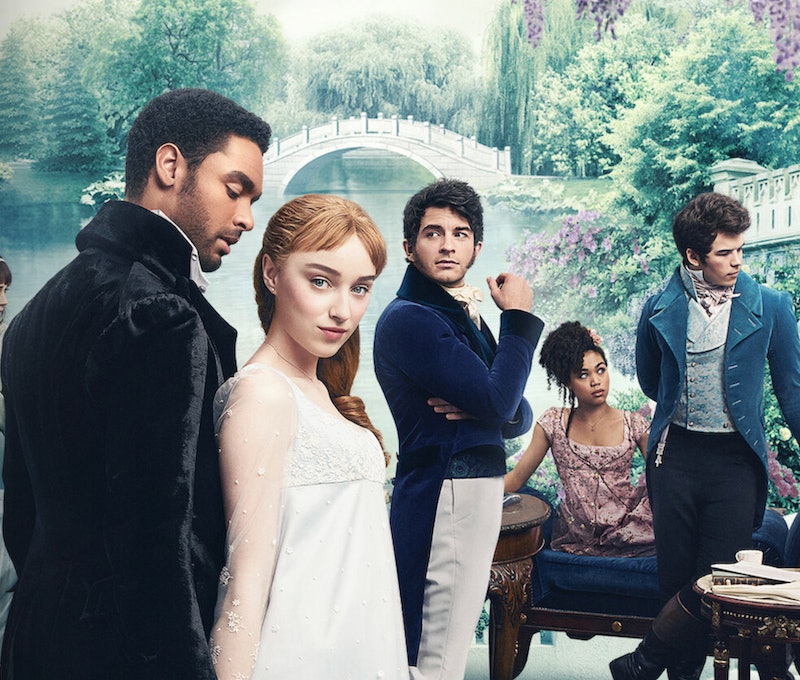 Shondaland's Bridgerton series is streaming on Netflix now,. The identity of the mysterious Bridgerton narrator — who is voiced by none other than Julie Andrews — will be revealed in the first season, but fans of Julia Quinn's source novels already know exactly who she is. So who is Lady Whistledown? Spoilers for Bridgerton and Romancing Mister Bridgerton follow.

The eight core novels follow the eponymous Bridgerton siblings, sons and daughters of a now-deceased viscount, as they search for love in Regency London. The first four novels — The Duke and I, The Viscount Who Loved Me, An Offer from a Gentleman, and Romancing Mister Bridgerton — feature the writings of Lady Whistledown: a pseudonymous columnist who reports on the society rumor mill for Lady Whistledown's Society Papers.

It's clear from the beginning that Lady Whistledown is someone very close to the Bridgertons and their friends, but Quinn waits to reveal her identity until the fourth Bridgerton novel. Netflix's Bridgerton speeds up this timeline by revealing Penelope Featherington — played by Derry Girls' Nicola Coughlan — as Lady Whistledown during the events of The Duke and I.

Romancing Mister Bridgerton centers on Colin and Penelope. He's the globetrotting Bridgerton sibling and a known prankster. She the best friend of his younger sister Eloise, who like Penelope is content to live out her life as a spinster. After all, no one's coming to ask for Penelope's hand, because she's entirely too shy to talk to anyone, and too chubby — or so she thinks — for anyone to want to talk to her. She carries a torch for Colin, but deep down inside, Penelope knows he's never going to notice her. Until he does, of course.

As you might have guessed, Penelope Featherington is Lady Whistledown. She manages to keep her identity a secret from everyone, including Eloise, but is found out when someone finally gets fed up with her gossip. A £1,000 prize offered to anyone who can uncover Lady Whistledown's identity sparks a number of inquiries, including a joint endeavour from Penelope and the oblivious Colin, who eventually discovers that his sister's best friend is the infamous gossip columnist when he catches her drafting a new piece. As for what happens next, well, you'll just have to read Romancing Mister Bridgerton to find out.