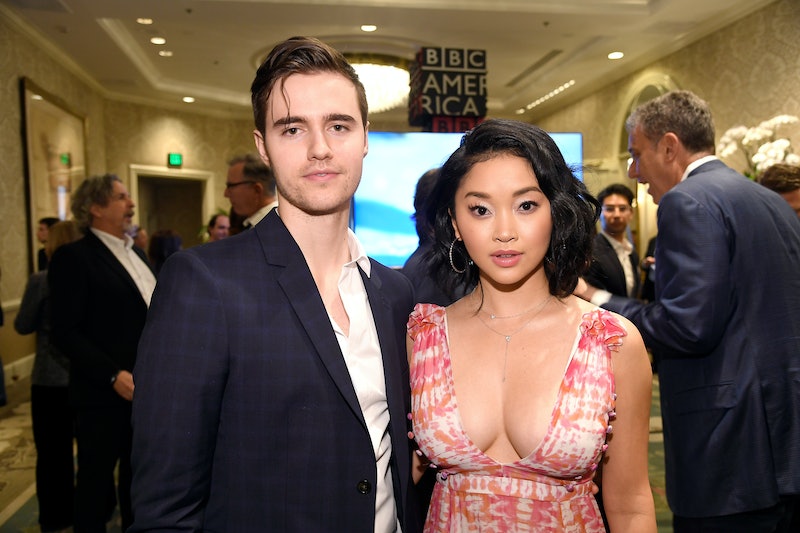 After To All The Boys I've Loved Before first came out, rumors began swirling that co-stars Noah Centineo and Lana Condor were more than just friends. But Condor put the theory to bed, telling The Tonight Show that she felt they had to be "best-friend professionals" for the She also elaborated on their relationship in an interview with Cosmo. "It’s because we believe in the story and the characters and we genuinely love each other. You can truly love someone in a very platonic way,” she told the mag. So who is Condor actually dating?

Condor's only got eyes for actor and singer Anthony de la Torre. The two have been dating for six years. Also in her interview with Cosmo, Condor shared that the two met in August 2015 at her first industry event (a Beverly Hills Emmy nominees party), and he used "Hi, I’m Anthony. I thought I would make a friend" as his pickup line. They spoke during the night, but as she headed out to her car she realized she never got that his contact info. So Condor ran back in and asked him for his number, "Because I have a joke that I wanted to tell you, and I forgot it, so I'll probably remember it later, so I'll text you the joke later," she told Cosmo. She ultimately texted him, "what do you call a pile of kittens," and de la Torre texted back, "a meowntain". It was love at first pun.

De la Torre's first onscreen appearance was in 2015, playing Anthony del Ray in Nickelodeon TV show 100 Things To Do Before High School. His film debut was playing young Jack Sparrow in Pirates of the Caribbean: Dead Men Tell No Tales. But a number of his roles reflect the other passion in his life: music. He appeared in both a Metallica short ManUNkind and Lords of Chaos as Jan Axel "Hellhammer" Blomberg, former drummer for Norwegian black metal band Mayhem. And as for his own music, in 2017, he fronted alt-rock band The Fell.

Originally de la Torre and Condor kept their relationship quiet. But Condor had to speak out when fans began harassing de la Torre, who had to temporarily shut down his Instagram. Condor told Teen Vogue, "I can't be that private with Anthony, because people are starting to be really hurtful to him...He's such an amazing person and has been an integral part of me staying literally sane."

These days their relationship blurs the line between personal and professional. "We’ve been working on a very special project for months now for you guys. It’s been blood, sweat, and tears. It’s been highs & lows & sobs & laughs but we’ve done it together, and that’s what counts," she wrote on Instagram in January 2020. Still, they remain a down-to-earth couple, as Condor and de La Torre have spent their time in quarantine in matching tie-dye outfits and trying out TikTok trends with their dog Emmy.

More like this
The 'Love, Lizzo' Harry Styles Scene Is Just 1 Moment That Made Fans Feel Seen
By Brad Witter
Miriam Haart & Girlfriend Nathalie May Have Broken Up After 'My Unorthodox Life'
By Brad Witter
Robert Brotherton's Boyfriend Ra'ed Saade Competed On Several Reality Shows
By Brad Witter
Richard Madden's Dating History Reportedly Includes This Model & A 'Doctor Who' Star
By Radhika Menon
Get Even More From Bustle — Sign Up For The Newsletter