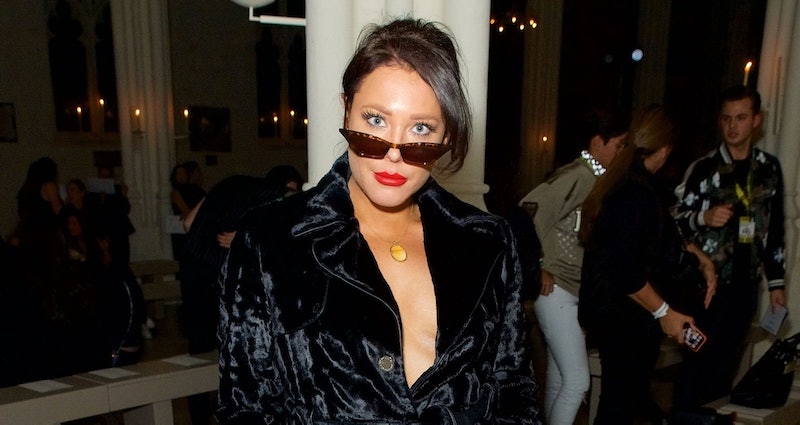 If you’re clued up with the world of fashion blogging and influencing, chances are you’ve already heard of Instagram star Lorna Luxe. She’s certainly a busy woman — she’s just released a new summer collection with fast fashion brand In The Style and has a collaboration with makeup brand MAC hitting shelves. But if you aren’t already familiar with her work, here’s what you need to know about the influencer.

Real name Lorna Andrews, she’s an Instagram influencer with over 1.3 million followers. She has been working as an influencer for around seven years, and before that worked in customer services for homeware brand Rockett St George. Prior to this she was a member of cabin crew for Virgin Atlantic.

The Instagram star currently lives in Sussex with her husband John and dog Bo, although she spends a lot of her time in London. When once asked where she would live if she could go anywhere in the world, Andrews replied: “I play this game with my husband. We start off in New York, an apartment somewhere near the high line - mojito's on the balcony. But invariably decide we need more sun and shuffle to Los Angeles. Runyon Canyon hikes, cortados at Alfred's and green juices on the reg.”

Along with a brand collabs, Andrews keeps busy with her platform and other projects, and recently revealed she actually only sleeps four to five hours a night, and her daily screen time is about 16 hours. She puts this down to being a self-proclaimed “workaholic.”

In 2020, Andrews’ In The Style line became the retailer’s fastest selling edit ever, selling 10,000 items in just ten minutes the day it launched. The making of Lorna Luxe’s collection was actually charted in the 2019 documentary Breaking Fashion, which aired on BBC One. The series (there are six episodes) took a look at fast fashion in the modern world. The first episode focused on Lorna and her In The Style creations.

Lorna's appearance in the BBC documentary saw the influencer meeting with In The Style's 32-year-old CEO Adam Frisby to coordinate the upcoming launch. Lorna's vision for the launch was to hold it in the south of France, apparently having been inspired by Sky Atlantic's popular TV show Riviera. The Instagram star hand picked a number of fellow influencers, and the group headed off on a trip to promote and celebrate the line.

The episode revealed just how important influencer-created content has become to fast fashion brands, something CEO Adam acknowledged on film:

"Although tonight is for Lorna and for everyone to have a bit of fun, I think the key thing for me is that they get good content."

"Content produces sales," he continued. "The more they post about it, the more they show the collection, the more people are interested and want to buy it. So, it’s really key we get enough assets out of tonight as well. The business has put hundreds of thousands of pounds into this so I hope it works and Monday it’s a sellout collection."

However, the show has been criticised for glorifying the industry, with journalist Sophie Benson describing it as “a stark reminder of pretty much everything that’s wrong with the fast fashion model.”

This article was originally published on Sep. 18, 2019