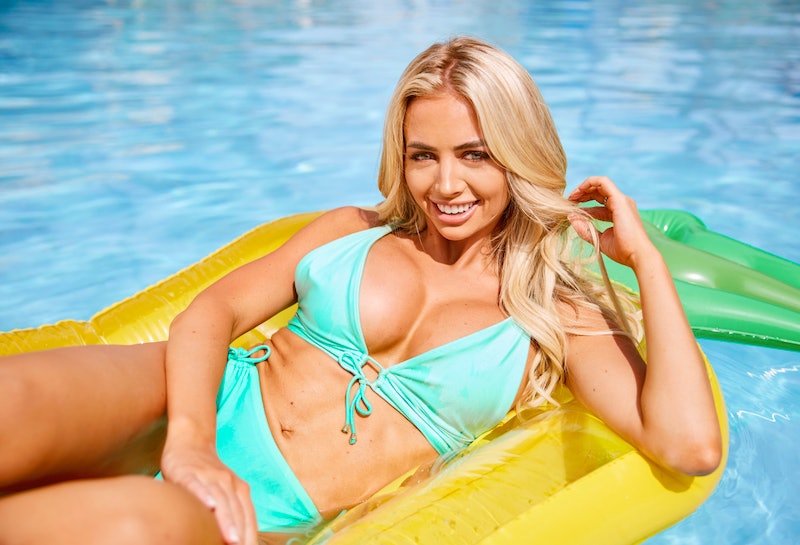 Love Island may be a show that requires female constants to make their first introductions in a bikini and heels, but Love Island cast member Mackenzie Dipman is determined not to be judged on her looks alone. In a video introducing herself to fans, she says people often tell her she's not what they expected. She knows that people have a certain impression of her based on her looks, but she wants to defy the "dumb blonde" stereotype. Mackenzie, who is a full-time student, says she's especially smart about the world of athletics. "I can talk sports with the best of them," she says. "I know a lot more than a lot of guys about sports." And she really does mean all sports.

While most people have a favorite team, Mackenzie has a favorite state — her home state of Arizona. She's a supporter of all her home teams in every sports arena. Her Instagram is filled with photos of her at various stadiums cheering on the Coyotes (hockey), the Diamondbacks (baseball), and the Cardinals (football) — though she did betray Arizona by supporting the Toronto Raptors in basketball last year instead of the Phoenix Suns. The Raptors won the 2019 championship, so hopping on that bandwagon was a good call.

Mackenzie's love of sports has left her without many of her hobbies in quarantine, as many sports teams are only beginning to return to normal play, and it'll be a while before she can hit the stands again. In May, she posted a selfie and she joked that she was "(im)patiently waiting for baseball."

In the absence of sports, Mackenzie has had time to work on some of her career goals. In February, she quit her job as a nightclub server, saying on Instagram, "Now it is my time to chase my dreams, and I cannot wait." It's not clear what those dreams are, and they may have even been put on hold by coronavirus. She's mostly been posting fashion photos on her Instagram lately, and, of course, now she's going on a reality television show.

Whether Mackenzie will meet her match on Love Island is unclear, mostly because all the contestants are missing one crucial trait that fits her recent type. According to her CBS bio, all of her exes were millionaires. But, hey, maybe she'll land some brand sponsorships out of this show and net her own millions.

More like this
We’ve Got A Text! Another 'Love Island' Series Is On The Way
By Darshita Goyal
5 Biggest Takeaways From Channel 4's 'Untold: Life After Love Island'
By Sophie McEvoy
Twitter Can’t Get Enough Of The Romance In 'Ekin-Su & Davide: Homecomings'
By Sophie McEvoy
Are Kayla and Seb From 'Too Hot To Handle' Still Together?
By Karen Fratti
Get Even More From Bustle — Sign Up For The Newsletter