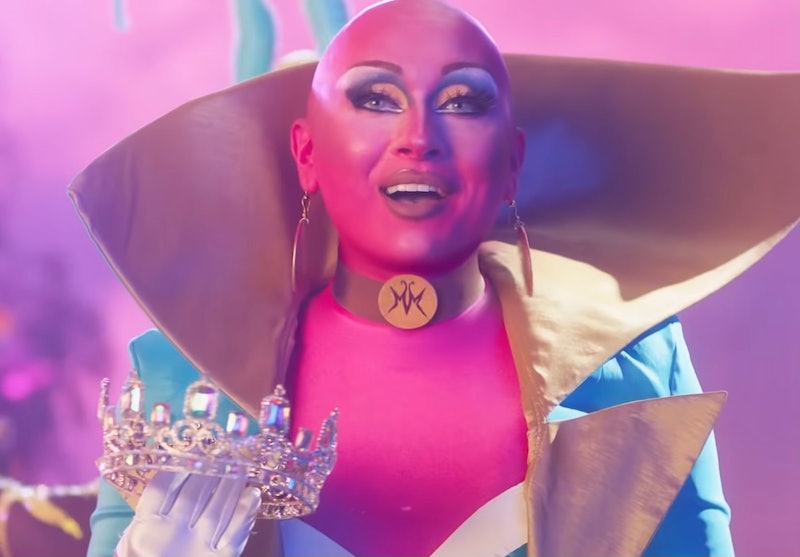 More than 150 queens have werked the runway on RuPaul’s Drag Race, but there’s never been a straight, cisgender man among them — until now. When the show returns for Season 14 on Jan. 7, Fayetteville, Arkansas-based queen Maddy Morphosis will join 13 other contestants to vie for the title of America's Next Drag Superstar. “I broke that glass ceiling, yeah. It’s finally time for a straight, white man to have their piece of the pie, right?” she joked in a Dec. 3 livestream announcing the cast.

Maddy — whose stage name is “a play on the word metamorphosis ... the epitome of what drag is” — doesn’t see herself as being that different from her colleagues. “While I am straight, I don’t consider myself a ‘straight drag queen,’ I’m just a drag queen who happens to be straight,” the 27-year-old explained in the video. “My sexuality doesn’t define the drag that I do, it doesn’t impact that. It’s just a facet of who I am outside of drag.”

Ultimately, Maddy hopes that other “straight guys watching Drag Race with their girlfriends” realize that it’s OK to be themselves and embrace their femininity because it “doesn’t change who you are.” Find out more about the Season 14 contestant below.

Not everyone was thrilled about Maddy’s Drag Race casting. Viewers criticized the show on social media for giving a spot to a privileged, cis-hetero white man that could have gone to an LGBTQ+ person with far fewer mainstream opportunities. Many also suggested that if Drag Race wanted to blaze new trails, producers could have cast queens with diverse queer identities not yet featured on the show, or even start featuring drag kings.

Maddy Morphosis responded to the criticism in a lengthy Dec. 5 Instagram statement, noting that you can’t “get a full sense of who someone is” or their story based on “short clips and snippets” online. “I entered the scene shortly after high school, because it was a safe space for me to explore my own gender identity,” she wrote. “The people I met, and the experiences I had helped me understand more about gender and sexuality, what it meant to be me, and where I fit in with everything.”

Noting that the concepts of “masculine” and “feminine” are “arbitrary and made up,” Maddy also acknowledged her privilege. “For anyone saying that I’m representing an underrepresented group, I appreciate you, but straight men are not a persecuted and excluded group within the drag community.” However, she has seen “many entertainers who have been discriminated against” for being AFAB (“assigned female at birth”), transgender, or someone of color.

“I think one of the best things to come out of my casting is that it’s kicking up a lot more talk about representation in the drag scene,” she concluded. “And I hope that it helps lead to more marginalized groups being showcased and represented.”

Before Maddy started doing drag around 2017, she enjoyed going to shows with friends but always said she “would never” participate herself. It wasn’t until a camp and comedy queen visited her small Arkansas town that she “fell in love” with drag. And though she quickly realized there were “no other straight drag queens,” she felt accepted by her local community.

“The drag in Arkansas is really amazing. There is so much diversity and different styles of drag. It is very pageant-centric though, where obviously I’m not much of a pageant queen,” Maddy explained in the livestream. “The only downside is that it’s in the middle of nowhere. I have to travel like three hours for bookings for $40 and three drink tickets. So [Drag Race] is definitely the biggest gig I’ve had so far.”

Maddy may refer to herself as “Arkansas’s Most Overrated Drag Queen” in her Instagram bio, but her photos tell a different story. Drawing inspiration from pop culture and art, she’s put her own spin on celebrities and fictional characters including Cher, Belle from Beauty and the Beast, Colonel Sanders, Beetlejuice, Robin from Stranger Things, Joaquin Phoenix’s Joker, Alex from Flashdance, Freddie Mercury, Ariana Grande, Joe Exotic, Marilyn Monroe, and Joan Jett. The crocheting enthusiast won her first drag competition in 2018 and went on to walk in Northwest Arkansas (NWA) Fashion Week.

While celebrating her birthday in September 2020, Maddy reflected on her drag career in an Instagram post. “Even though 2020 is trash, this past year has still given me many great moments and introduced me to a lot of amazing people,” she wrote. “I’m so thankful to the community and the people around me who have helped me grow, both as an entertainer and a human being!”

More like this
Brianna Revealed Why 'The Bachelor' Premiere Was Tougher For Her Than You Saw On TV
By Brad Witter
The Bachelor’s Christina Mandrell Comes From One Of Country Music’s Most Famous Families
By Brad Witter
Linda Ronstadt’s “Long Long Time” Plays A Pivotal Role In The Last Of Us
By Brad Witter
Here's Everyone Who Will Be Competing In 'Survivor' Season 44
By Brad Witter
Get Even More From Bustle — Sign Up For The Newsletter
From hair trends to relationship advice, our daily newsletter has everything you need to sound like a person who’s on TikTok, even if you aren’t.