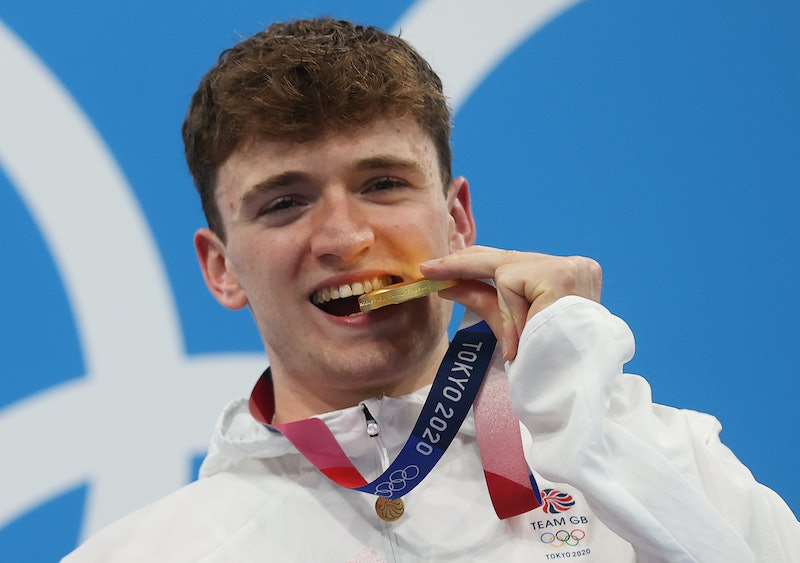 Early this morning (July 26), many of us awoke to the fantastic news that Tom Daley and his diving partner Matty Lee clinched a gold medal during the synchronised 10m diving event at the Toky Olympics. The pair was awarded a total score of 471.81, just points above silver medallists Cao Yuan and Chen Aisen (470.58).

This is obviously a historic moment in 27-year-old Daley’s career — ending his long wait for a gold since the London Olympics in 2012, where he swept a bronze medal. But it’s equally historic for Lee, who is four years his junior.

Lee told the Guardian, “I was a massive fan of Tom’s. I remember running up to him and asking for photos and signatures. I think I was about nine.”

He continued, “There’s a photo of me and Tom around the year of Beijing and it’s funny because I’m just a kid with a big head. We put them together with another photo that’s more recent. It’s funny how things change. All those years I was a fan, a little kid looking up to him. Now we’re best mates and Olympic gold medallists.”

Lee told Attitude magazine back in May, “I 100% have become a better diver just from the two or three years I’ve been training with Tom.” He added that Daley “took [him] under his wing” when he first arrived in London, and that “[w]hatever Tom decides to do after this Olympics, I don’t know what I’m going to do without him, to be fair.” Aww.

The win has thrust him into the public spotlight — so here’s all we know about Matty Lee.

Who Is Matty Lee?

Lee is a British diver who was born on 5 March, 1998, in Leeds, England. According to the British Swimming Organisation, Lee is a member of Dive London aquatics club and coached by Daley’s long-term mentor Jane Figueiredo. The Yorkshire Evening Post also notes that he was coached by Russian divers and Sydney 2000 gold medallists Vera Ilyina and Yuliya Pakhalina.

According to British Swimming, Lee’s talent could be noticed way back, when he won multiple golds in the Group B 3m Springboard event at the European Junior Championships across 2012 and 2013.

What Medals Has Matty Lee Won?

In 2014, Lee won his first senior international medals, earning a bronze at the FINA Diving World Series. He also earned bronzes that year at the National Cup and British Championships.

In October 2018, Lee started partnering with Daley. They finished in bronze in 10m synchro event at the 2019 World Aquatics Championship in Gwangu, and a gold at the FINA Diving World Cup held in May this year — which qualified them for the Tokyo 2020 Olympics. How far they’ve come.

Tl;dr? This man’s a certified talent.