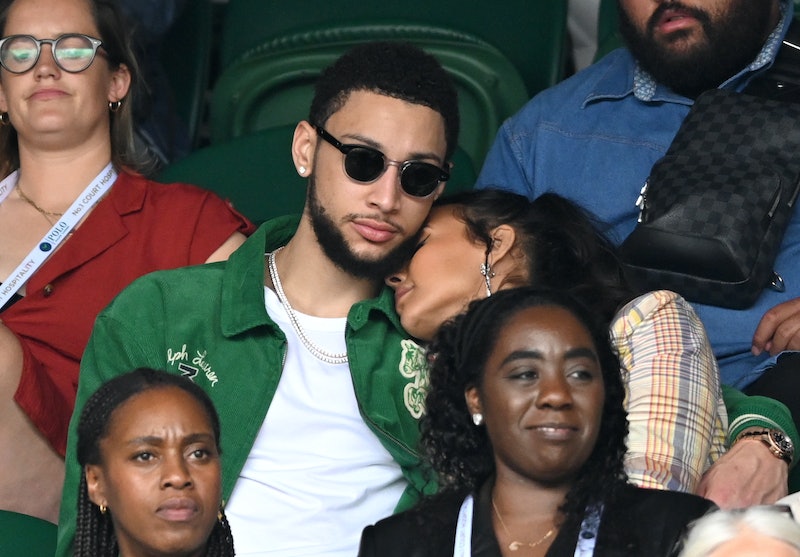 Taking the reins from Stacey Dooley, Maya Jama recently became the new host of Glow Up. And 2021 is definitely shaping up to be a busy year for the TV presenter, as she has also joined the Celebrity Juice panel as a regular, too. But what about Jama’s life off-screen? More specifically, is she dating anyone right now?

It was around May 2021 that rumours began circulating connecting Jama to Australian basketball player Ben Simmons. The pair were first said to have been spotted together in Philadelphia around this time and things seemed pretty certain when the NBA star shared a screen-grab of a FaceTime call he had with Jama on June 12, where both were seen grinning at each other.

The relationship was officially confirmed on Monday (July 6) when the pair were photographed kissing and cuddling at Wimbledon during a match between Novak Djokovic and Cristian Garin on centre court.

Neither have said anything about each other on social media, but Jama did post an Instagram story of her leaning on Simmons’ shoulder with his back to the camera.

The Philadelphia 76ers player had been dating Kendall Jenner since 2018, and the couple were off and on again throughout 2019 and 2020.

Prior to the rumours involving Simmons, Jama appeared to have been enjoying single life. Following her breakup with Stormzy in 2019, the new Glow Up host discussed how she was very happy in her own company. “I forgot how much I loved just literally being in a house with loads of my friends, eating, talking, drinking,” she told the Evening Standard. “I was like, I miss this a little bit. I’m having fun.”

In December 2020, it was rumoured that the couple were back together. According to Capital Xtra, a source alleged that Stormzy spent time with Jama over Christmas. However, neither has commented on the rumours, and there aren’t any clues on their social media that would suggest they were back together. The involvement of Simmons in Jama’s love life could also put a stop to the Stormzy reconciliation rumours.

Jama has also been linked to Drake in the past after the rapper mentioned her name in one of his songs. The lyric can be found in Only You and goes, “Chubbs might jam this yute for a chain / And give it to a sweet one, called that Maya Jama”.

While Jama has always stayed relatively quiet about her dating life, her work life has been pretty jam-packed since she first started presenting in 2015. Over the past five years, she’s appeared on The Circle, RuPaul’s Drag Race, and Big Fat Quiz of the Year among other shows, as well as presenting her own BBC Radio 1 show, and hosting at awards shows including the MOBOs and BAFTAs.