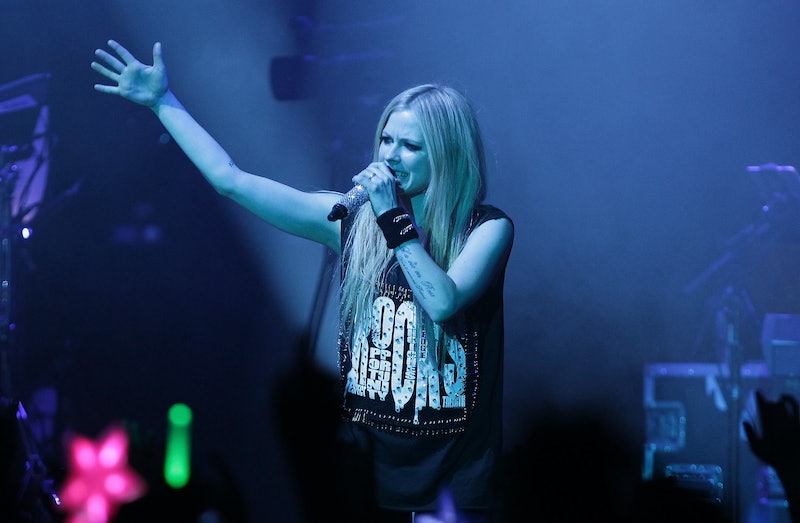 The internet loves a conspiracy theory, and any celebrity, it seems, is liable to see a web of lies spun around them — including Avril Lavigne. The Sk8r Boi singer and pop-punk musician happens to be the target of a particularly bizarre theory, which posits that the “real” Avril Lavigne died in the early 2000s, and a doppelgänger named Melissa Vandella has been impersonating her ever since. So who, in this sideways, body double-filled world, is Melissa Vandella supposed to be?

According to these conspiracy theorists, Vandella is an actress that Lavigne's team hired in 2002 due to her strong resemblance to the singer. Believers posit that the singer was struggling with depression at the time, and having trouble meeting the publicity obligations for her debut album, Let Go — so Vandella was brought on to lighten her load. The press was apparently none the wiser. Then, the theory goes, Lavigne died by suicide in 2003 after her grandfather’s passing — and with the real Avril out of the picture, Vandella just took over her entire life and continued Lavigne's career.

While you can read all about the theory in a variety of places, it's harder to find is information about Vandella, starting with whether or not she actually exists as a real person. None of the social media accounts that can be found for this alleged person are verified — including a Twitter account, under the very subtle handle @AvrilIsDead.

There, you can find claims that she is the one who has appeared in Lavigne's videos since her supposed death — most notably the video for "Hello Kitty," which was a particularly confusing change of direction for fans of the singer. (Not to mention extremely culturally insensitive.)

However, it's worth noting that the account has been silent since 2015, which is also when she joined Twitter. And that it spells her name differently than it's listed on the Facebook account — "Vandela" instead of "Vandella."

One thing that it's not possible to find for Vandella, however, is an IMDb page, which is very unusual for someone who's supposedly been in the industry for the past decade or so. It makes it pretty tricky to determine whether she is a real person who's gotten tangled up in this conspiracy theory, or just a persona invented by it. Regardless, there's very little information about her on the internet.

That said, it hasn't deterred believers in this conspiracy theory, which has repeatedly resurfaced, most recently in 2017. Fans like @givenchyass, who revitalized the theory with a 50-post tweetstorm about it, are as convinced as ever that Vandella not only exists, but that she has replaced the woman she was once hired to act as a lookalike for.

In 2018, Lavigne finally addressed this theory directly, shutting it down on the record for the first time. After a radio host asked if the musician “laughed” when she heard that some theorists believed she was a doppelgänger, Lavigne replied, “Yeah, some people think that I'm not the real me, which is so weird! Like, why would they even think that?” Why indeed.

More like this
Spotify Wrapped 2022: The Best Celebrity Reactions To Their Streaming Stats
By Radhika Menon
Yes, That's Lindsay Lohan's Sister Singing In The 'Falling For Christmas' Movie
By Radhika Menon
Taylor Swift Fans Sue Ticketmaster For The Eras Tour “Ticket Sale Disaster”
By Jake Viswanath
Britney Spears Celebrated Her Birthday With Loving Messages To Jamie Lynn & Her Sons
By Brad Witter
Get Even More From Bustle — Sign Up For The Newsletter

This article was originally published on May 15, 2017