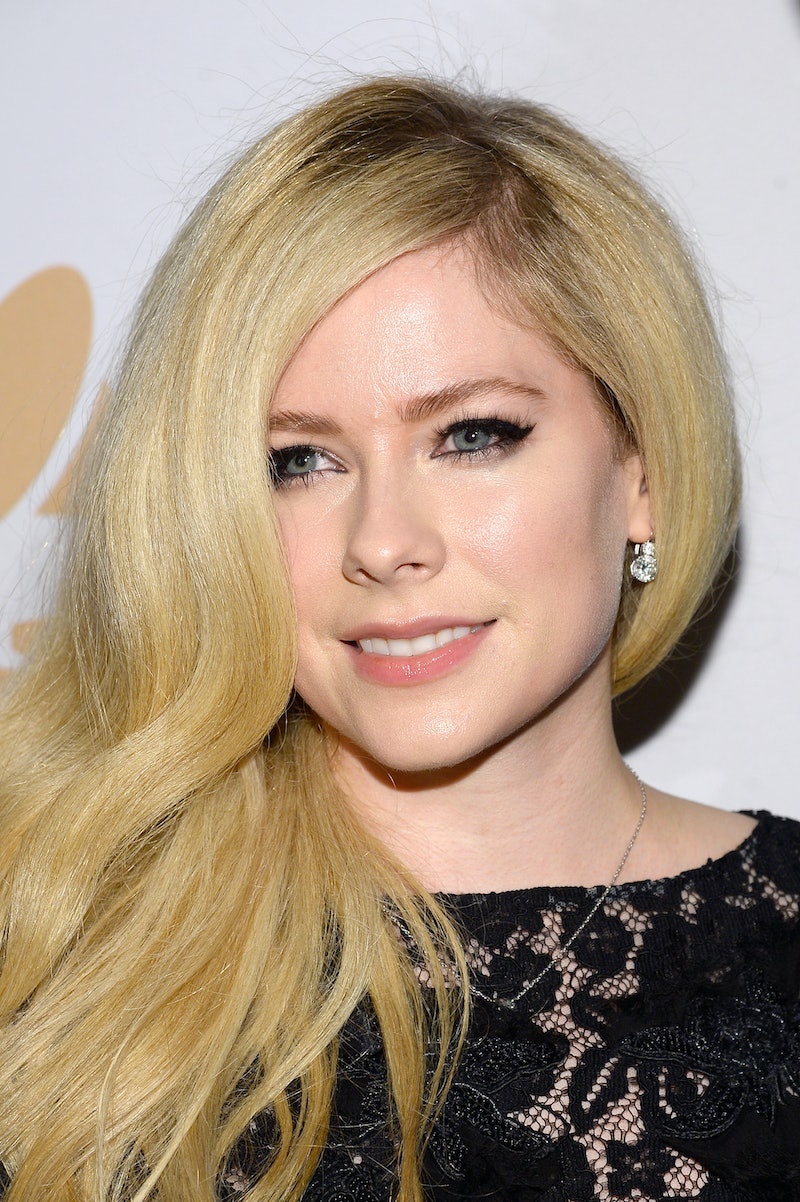 Avril Lavigne: Canadian, pop star, 2000s icon, and ... clone? At least that's what one Twitter user is saying, after an Avril Lavigne conspiracy theory has gone viral. Twitter has gone bonkers after user @givenchyass claimed to believe that Avril Lavigne is dead and was replaced by a lookalike — which, while extremely unlikely on all counts, is not the weirdest claim that's been made on the internet in 2017. (Paul McCartney is in a Pirate's of the Caribbean movie, guys. Anything is possible.)

Funnily enough, this is not the first time that the pop star icon has had such ~rumors~ spread about her. In 2015, Vice explored a similar theme where fans were claiming that during her reinvention — think between the "It's Complicated" era of ties and punk to the "I Don't Like Your Girlfriend" era of bright colors and pep — she actually became someone else entirely.

But the ongoing (and, I cannot emphasize enough, very unverified and hilariously untrue) conspiracy continues, this time with Twitter joining the fray. The thread about it, which now has 37,000 retweets, has become a meme in its own right, with users looking back on the last decade and a half of Avril Lavigne's rise to fame and dissecting each moment, wondering if (le gasp) everything we know is a lie. Here's the thread:

The user sends another few tweets emphasizing that this is a fun internet theory, not #facts, but then presents the "evidence" in the thread.

OK, but, like, same. The paparazzi are ALWAYS on my back.

In the thread, @givenchyass then goes on to explain that, after hiring the lookalike, Avril Lavigne shortly ended up leaving the limelight altogether. The user cites an "unknown source" that claimed that Avril Lavigne's grief after losing her grandfather drove her to reject the fame, but continue writing — songs that, when Avril didn't want to sing them, Melissa sang instead, taking over the persona of "Avril Lavigne" entirely.

Here's where the theory gets even more bizarre: the user claims that, according to the conspiracy theory, Avril Lavigne actually died between the making of her second and third albums. The second album was released with her voice, and the third with her songs — and Melissa's voice.

The user then claims that "Melissa" has different birthmarks than Avril Lavigne, and that when Lavigne was asked about the conspiracy in an interview, she grew "nervous" — however, there aren't any photos or videos linked out to either of those events, even if they could be considered evidence.

The truth, though, while far less shocking, is that Avril Lavigne is alive and well and still repping for the Kids With Emotions from the 2000s (aka, me and the entirety of Gen Y).

And there's new music in the works! You know how the saying goes: everything old is pop punk princess again.

Besides, if you're ever looking for Avril Lavigne, we all know where she is — standing on the bridge, waiting in the dark (and ugh, she thought that you'd be here by now).

More like this
You’ve Been Singing The Wrong Lyrics To “All I Want For Christmas Is You”
By Sam Ramsden
The 'Kenan & Kel' Reunion On 'SNL' Took A Dramatic Turn, Thanks To Keke Palmer
By Brad Witter
Paris Hilton’s Tweet About The 2006 “Holy Trinity” Photo Will Make You Feel Old
By Marina Watts
The First Trailer For 'That '90s Show' Includes So Many Nods To The Original Series
By Jack Irvin, Alyssa Lapid and Grace Wehniainen
Get Even More From Bustle — Sign Up For The Newsletter