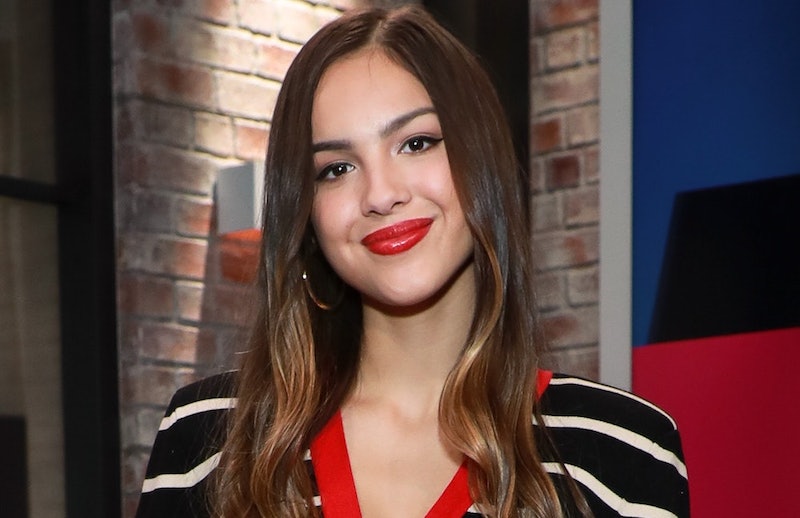 About a week after its debut, Olivia Rodrigo's "Drivers License" now sits atop the Billboard Hot 100. A heartbreak anthem that has been compared to the likes of Lorde, Phoebe Bridgers, and Taylor Swift, the Disney teen's debut single has captivated listeners with its catchy beat and devastating lyrics. Much of the chatter, however, has been about who the ballad is actually about, and now, Rodrigo has addressed the rumors that the track was inspired by her rumored ex-boyfriend Joshua Bassett.

A quick crash course for those born before the year 2000: Rodrigo and Bassett both star as an on-again, off-again teen couple in the Disney+ series High School Musical: The Musical: The Series. While they never confirmed their relationship, fans have long speculated that the two started dating outside of the series. "Drivers License" is thus presumed to be a song about their breakup. In the wake of their alleged split, Bassett has been spotted with fellow Disney star Sabrina Carpenter.

Fans have since speculated that "Drivers License" is a response to Bassett and Carpenter because of the lyric, "You're probably with that blonde girl who always made me doubt / She's so much older than me, she's everything I'm insecure about." (Carpenter is four years Rodrigo's senior.) As for the validity of such claims, Rodrigo addressed the rumors in a recent interview with Billboard. Well, kind of.

"I totally understand people's curiosity with the specifics of who the song's about and what it's about, but to me, that's really the least important part of the song," she said in the Tuesday, Jan. 19, interview. "It's resonating with people because of how emotional it is, and I think everything else is not important."

The rumors that the track is about Bassett reached a fever pitch after he released his own single, "Lie Lie Lie," just a week after "Drivers License" came out. In addition to music video parallels of the two of them leaning out of cars, Bassett's lyrics about a former flame lying and deflecting blame continued to fuel rumors of a Disney love triangle. However, Bassett seemingly squashed rumors that his song is a response to Rodrigo's, explaining on his Instagram Story that the track is about a friend who "had been lying about me behind my back for years" — one who threw him "under the bus."

More like this
Everything To Know About The 2023 Grammy Awards
By Jake Viswanath
Twitter Can’t Believe The Madonna Biopic Is Scrapped & Fans Have A Solution
By Alyssa Lapid
Zach Gilford Admits He Forgot Taylor Swift's Name When He Starred In Her Music Video
By Jake Viswanath
Hilary Duff's Husband Matthew Koma Has Her Name Tattooed On His Butt
By Jake Viswanath and Stephanie Downs
Get Even More From Bustle — Sign Up For The Newsletter
From hair trends to relationship advice, our daily newsletter has everything you need to sound like a person who’s on TikTok, even if you aren’t.