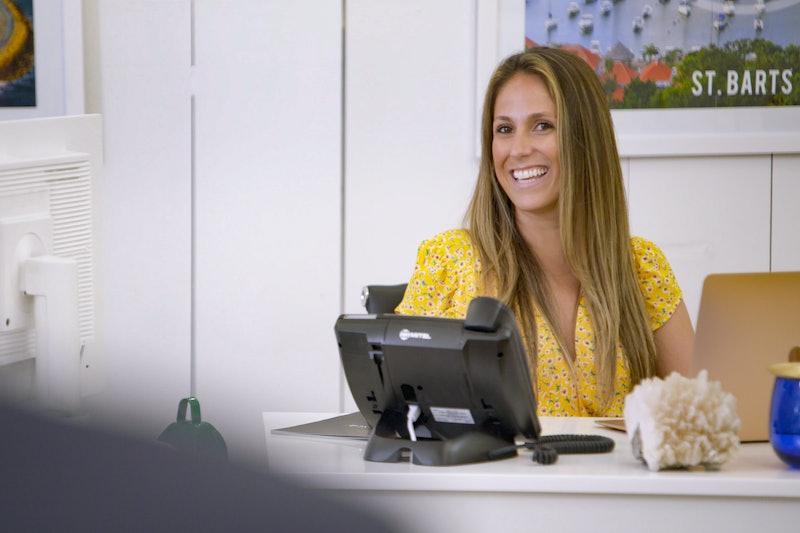 According to Netflix's new real estate reality show Million Dollar Beach House, the Hamptons home market is still as robust as ever. Channelling Selling Sunset, the show follows five brokers who work at Nest Seekers, a large New York brokerage firm that specializes in selling glitzy multi-million-dollar properties. Peggy is one of the five agents on Million Dollar Beach House hustling to sell houses, and she does it all while appeasing clients and dealing with personal drama with coworkers.

According to Peggy's bio on Nest Seekers, she was born in Queens, raised on Long Island, and graduated from Hofstra University's Zarb School of Business. After college, she dabbled in commercial real estate before pursuing law school and studying up on international real estate transactions in the meantime. Now, as a member of the New York State Bar, she has a deep knowledge of property, contracts, and zoning provisions, all things that make her a formidable real estate broker. She works alongside a team that she dubs the "Peggy Z Team," and prides herself in making the real estate process as seamless as possible for her clients. According to her Nest Seekers page, she's sold over 34 (very expensive) homes, and has rented over 48 (very expensive) apartments.

"After seven years of killing it in the New York real estate market, why not just kill it out here [in the Hamptons]?" Peggy says in the trailer.

If you want to peek inside some of the lavish homes she's sold, Peggy's Instagram is full of virtual walkthrough videos, which were likely created in the wake of the pandemic. She also posts adventures with her partner Russell, videos of her dad's veggie garden, and shots with her fellow Nest Seekers coworkers.

According to the trailer, despite Peggy's experience, it won't all be smooth sailing at Nest Seekers. She seems to have a contentious relationship with coworker Noel, whose desk literally faces hers at all times. (Ah yes, the open office plan we all love to hate.) "You're so phony," Peggy says to Noel in the trailer. "I've never met another broker as rude as Noel."

There's bound to be plenty of drama in Million Dollar Beach House, and viewers will have to wait and see if Peggy is able to rise above all the noise.