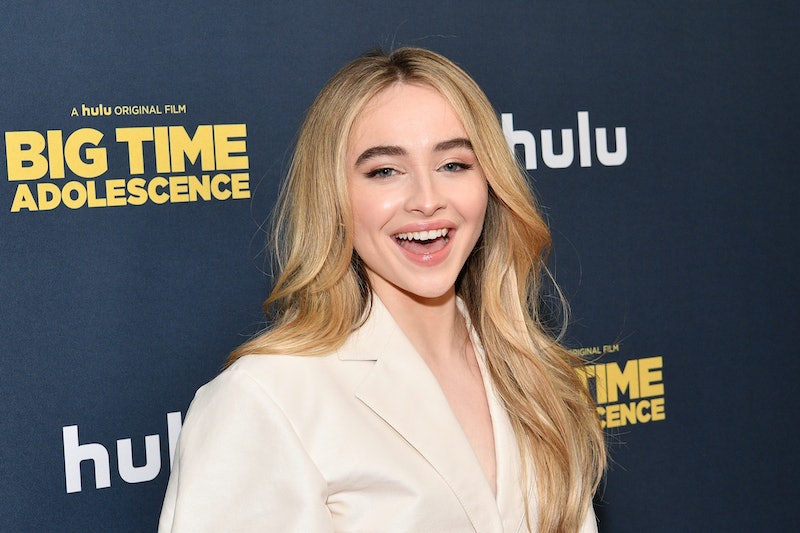 Work It star Sabrina Carpenter isn't new to the spotlight. She first broke out with her role as Maya in Girl Meets World, the Boy Meets World reboot, and went on to appear in Horns, The Hate U Give, and Tall Girl in addition to releasing music. Naturally, that's come along with a lot of attention on her love life, but Carpenter doesn't appear to be dating anyone in 2020.

The actress has been connected to a number of her fellow co-stars in the past. As E! reports, her first public boyfriend was fellow Disney kid and Good Luck Charlie star Bradley Steven Perry, who she dated from 2014 to 2015. Carpenter was then rumored to be dating Girl Meets World co-star Corey Fogelmanis and Riverdale star Casey Cott at various points, but was most recently in a relationship with actor Griffin Gluck. However, a rep for Carpenter confirms the two have split.

Carpenter and Gluck met while filming the 2019 Netflix movie Tall Girl and began dating in October of that year, Pop Sugar reports. The two had a lot of fun, dressing up as Britney Spears and Justin Timberlake in their iconic denim ensembles for Halloween and attending some Golden Globe parties together earlier this year.

Before the pandemic sent everyone into quarantine mode, Carpenter also accompanied Gluck to the New York premiere of his latest film, the Pete Davidson-fronted comedy Big Time Adolescence. According to JustJared, the two walked the red carpet separately but then got cozy together at the after-party. It's not clear what led the two to part ways between then and now, as neither have publicly commented on their breakup. But, like the rest of us, Carpenter likely isn't doing much dating in quarantine.

Correction: A previous version of this article mischaracterized Carpenter and Gluck's relationship status. It has been updated to accurately reflect their split.

More like this
Dodi Fayed Produced Movies Starring Robin Williams & Demi Moore After 'Chariots Of Fire'
By Brad Witter
How To Stream Knives Out 2: When Will Glass Onion Be On Netflix?
By Radhika Menon
Here’s Everything Coming To & Leaving Netflix In December
By Jake Viswanath
The 'Love, Lizzo' Harry Styles Scene Is Just 1 Moment That Made Fans Feel Seen
By Brad Witter
Get Even More From Bustle — Sign Up For The Newsletter