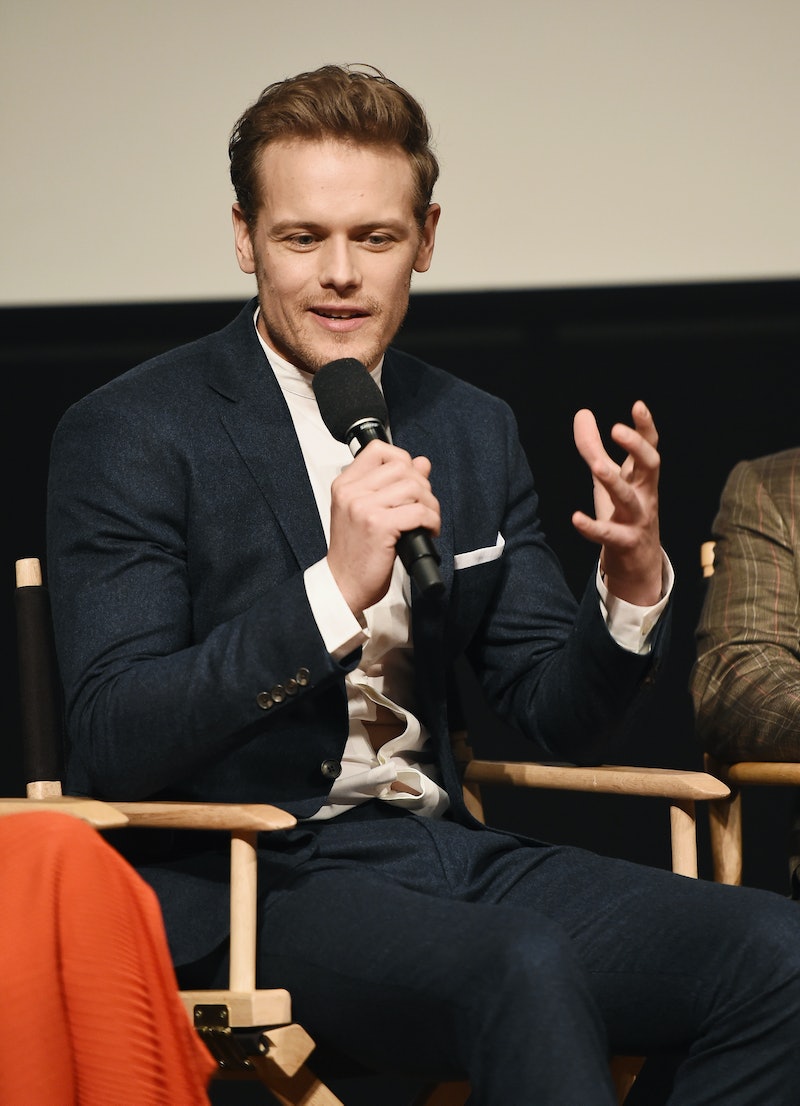 If you're a fan of Outlander, it's likely you're a fan of Sam Heughan. The actor, who is best known for his role as Jamie Fraser, is hot property right now. His work on the historical period drama has also had him pegged as the fan favourite for the next James Bond. But much like 007 there has been ongoing speculation for years about Heughan’s relationship status. But who exactly is Sam Heughan dating?

Well, it's sort of unclear right at this moment, if I'm honest. I have reached out to Heughan's reps to discover what his relationship status is but am yet to hear back with the official word, so all we can really go on is recent speculation and rumour (always reliable, then!).

According to Us Weekly, Heughan is off the market and has been connected to fellow actor Amy Sheals. Marie Claire, reported that they’re long-term friends. If Shiels sounds familiar, it's because she has starred in hit TV show Twin Peaks. She played Candie, who along with Mandie and Sandie (catchy) was an assistant to Rodney and Bradley Mitchum. She's also been in TV series The Detour and movie Final Fantasy XV.

Marie Claire reports that the rumours have been swirling for years and years, but they seriously gained in momentum after a fan tweeted the pair would make a beautiful couple in 2014 and, according to the publication, Shiels 'liked' the tweet. Interesting...

If I'm honest, that's where the validity of this rumour sort of ends. Neither party has ever commented on their situation or confirmed anything. The two have been friends for about 10 years though, so here's hoping something could blossom. They would, after all, make a pretty beautiful couple, don't ya think?

Prior to these rumours, Marie Claire reported that Heughan apparently used to date MacKenzie Mauzy, another fellow actor. The pair dated back in 2017, with their relationship fairly under wraps and low key, apart from a few Instagram posts here and there. They were then snapped looking pretty loved up at a couple of red carpet events earlier in 2018 but then, well, nothing... So I'm guessing things have gone cold on that front. Recognise Mauzy? She has starred in a number of movies and TV series, from Into The Woods to Girls' Night Out.

It seems fitting though that there’s so much mystery surrounding Heughan’s love life following the announcement that he is the fan favourite to play the next James Bond. In a Radio Times poll, readers voted him their favourite to replace Daniel Craig, beating the likes of Idris Elba, Cillian Murphy, and Richard Madden to the role. Over 80,000 votes were cast, 24,000 of which went to Heughan. His closest competitor was Tom Hardy.

Craig confirmed that No Time To Die would be the last time he stars as Ian Flemming’s legendary character. Heughan also told This Morning that he auditioned for the same role over a decade earlier. He said, “obviously it’s a dream for every actor. I auditioned for it back when they were doing Bond 21 when Daniel Craig was cast in Casino Royale.”

While it isn’t clear who Heughan is romantically linked to right now there is one thing that’s fairly certain: You’ll be seeing a lot more of him on the big and small screen. The next Bond is yet to be announced, but it seems he has the fans vote in a very big way.

This article was originally published on November 9, 2018