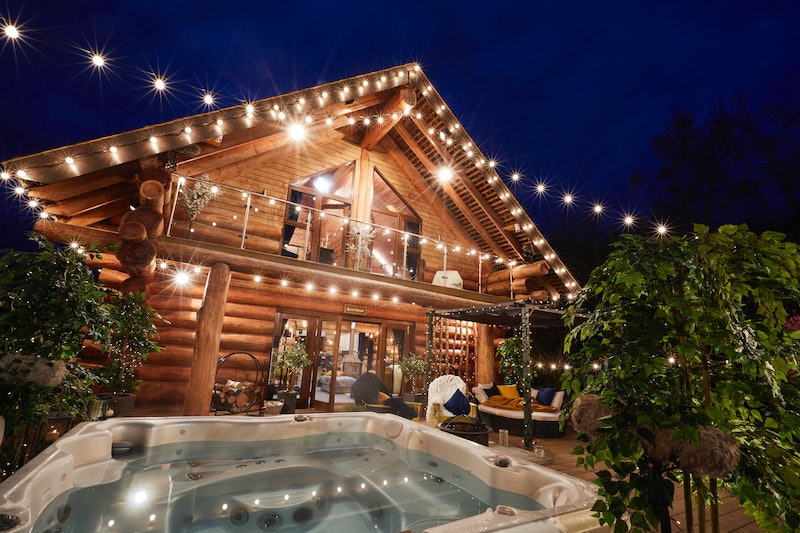 ITV is gearing up to introduce us to the brand new reality dating show The Cabins in January 2021. In this series, six contestants have 24 hours to find love in UK-based cabins kitted out with hot tubs and crackling fires. From the looks of the new trailer, the dating show will help fill a Love Island shaped hole in our lives but who is the voiceover for The Cabins?

As we've come to learn from Love Island's Iain Stirling, hilarious commentary from a quick-witted voiceover artist help make a UK reality dating show a hit. Taking up the challenge for The Cabins is comedian Maisie Adams from Yorkshire. Best known for stints on Mock the Week and Have I Got News for You, Adams will be keeping a watchful eye on The Cabin contestants to see if any sparks fly (or whether that's just the log fire).

Adams' comedy career kicked off in 2017, when she entered the nationwide So You Think You're Funny? competition (which has previously been won by many of her comedy heroes, including Peter Kay, Aisling Bea, and Tom Allen). Before she knew it, she found herself with a place in the Grand Final, held at the Gilded Balloon up at the Edinburgh Fringe Festival, and on August 24 she won the competition, becoming only the fourth woman to have done so in its 30-year history.

The following year, Maisie was nominated for the Best Newcomer award at the Edinburgh Comedy Awards for her debut show Vague, where she also won the Amused Moose National Comic Award. So I think it's safe to say that The Cabins commentary is going to be laugh-out-loud hilarious.

On her latest gig, Adams said: “I can’t wait to spill all the juice from life inside the cabins. After spending most of the year staying inside, this is going to be both strangely relatable for everyone yet also absolutely wild as first dates go.

"Besides, I ran out of things to say to my housemates back in May, so it’s been nice to gossip about this lot in a room on my own!"

ITV's new dating show — which was pre-recorded and subject to strict COVID measures — will see six contestants pair up in three plush cabins. After 24 hours they can choose to spend more time together or 'check out' and leave the cabin.

We can't wait for our new TV obsession to begin...

More like this
Molly-Mae Hague & Tommy Fury Celebrate Pregnancy Reveal In The Sweetest Way
By Sophie McEvoy and Sam Ramsden
'MAFS UK' Changed The Rules After Matt & Whitney Cheated On Their Partners
By Catharina Cheung
What Exactly Is The Bish & Chips Show?
By Frances Stewart
How To Get Tickets To 'Strictly Come Dancing's Live Tour
By Sophie McEvoy
Get The Very Best Of Bustle/UK