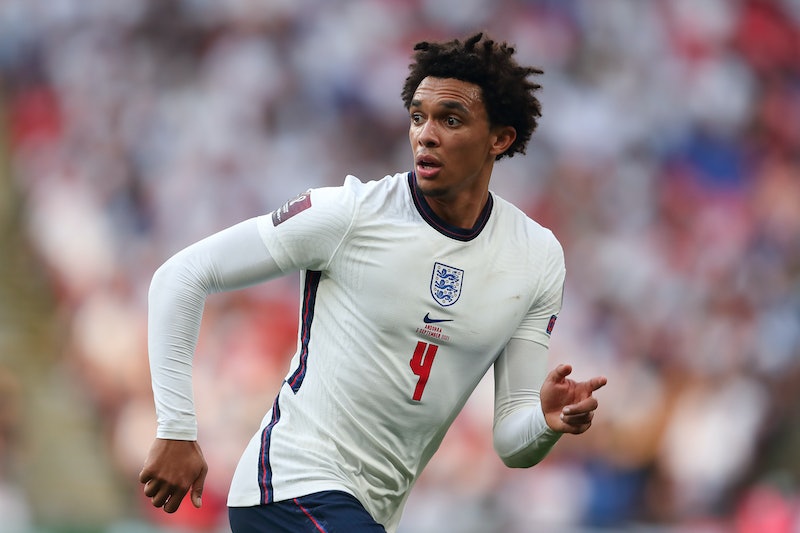 England is back and crushing it in the World Cup qualifiers, and one player that has continued to wow spectators as a right-back for the nation’s team is Trent Alexander-Arnold. Regarded as “one of the best right-backs ever” by Brazilian football legend Cafu, the 22-year-old is shaping up to be one of the sports most recognised players. But who’s supporting the young footballer on the sidelines?

Alexander-Arnold is rightfully private about his love life, although he did give a little hint about his current relationship status during a 2020 interview with fellow footballer Andy Robertson. When asked whether the rumours he was dating singer Dua Lipa were true, Alexander-Arnold told a hilarious story about his mum wondering the same thing. “I was like, ‘Mum, I literally stay at home every day. I think you’d know if I was dating someone and I think you’d definitely know if it was her’.”

And of course, as Dua Lipa has been all loved-up with boyfriend Anwar Hadid (yes, Gigi and Bella’s brother) since 2019, we think it’s safe to say that this particular rumour is well and truly quashed.

However, this doesn’t mean the player is single. Alexander-Arnold was spotted on a lunch date in June 2021 with his reported girlfriend Hannah Atkins, according to the Daily Mail. The pair were photographed leaving Cibo Restaurant in Hale Village, Cheshire. Atkins hasn’t appeared on the footballer’s social media, and her Instagram account is set to private.

This lunch date came shortly after the footballer had to step down from participating in the rest of England’s Euro 2020 matches after suffering from a recurring thigh injury. “Absolutely gutted,” Alexander-Arnold tweeted at the time.

Thankfully, the footballer was cleared to play in the World Cup qualifiers on Aug. 26, 2021. He’s joined by Liverpool teammate and midfielder Jordan Henderson. “Amazing feeling to be back in an England shirt,” he celebrated on Twitter. Whether his rumoured