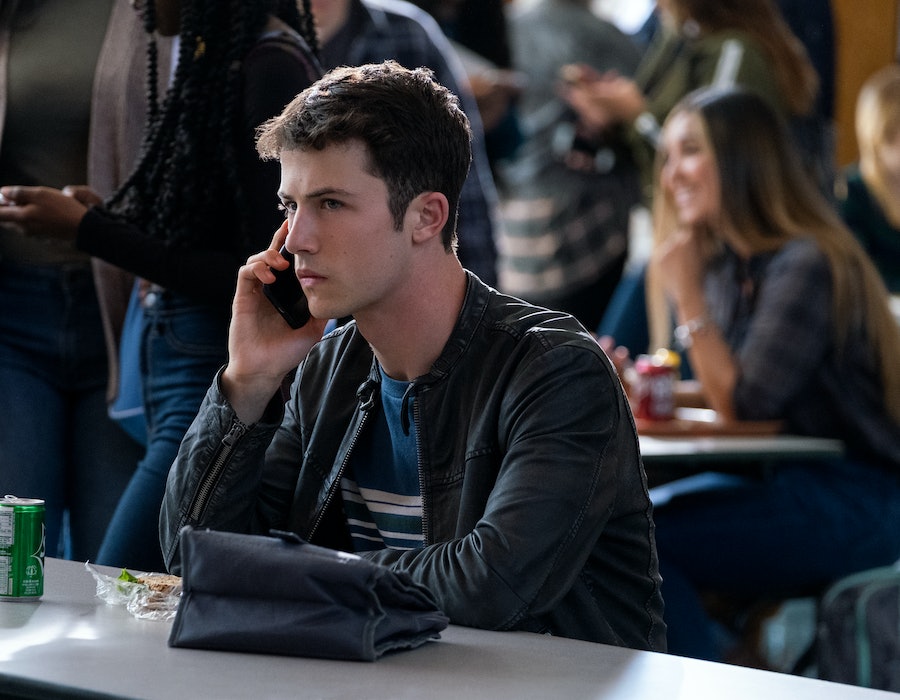 Spoilers ahead for 13 Reasons Why Season 4, Episodes 1-3. From the start of the final 13 Reasons Why season, it's clear that Clay Jensen is struggling. Last season, he was arrested for the murder of Bryce Walker — a crime he didn't commit — and then he helped his friends cover up that murder by framing Monty De La Cruz. In the first episode of Season 4, Clay is haunted by images of Monty in his dreams. By the second, Clay gets a phone call from Monty. But since Monty is actually dead, whoever is calling Clay on 13 Reasons Why and pretending to be Monty is just messing with him. And it's really working.

The calls start out small. When Clay is up late filling out college apps, Monty's phone number tries to FaceTime Clay twice. He rejects both calls. At the end of the episode, Monty's number texts, "Monty was framed. You framed him." Then the number sends a bunch of images of Monty to Clay. But it was Episode 3 that really ramped up the twisted prank.

When the number won't stop calling him, Clay finally picks up. A disguised voice on the other end taunts, "See you in school." At first Clay thinks that Winston's responsible because he was nearby at the time. But when he asks the voice on the phone if he's Winston, it responds, "Who the f*ck is Winston? Don't you recognize the phone number?" Clay does, because it's Monty's.

As the day goes on, the calls keep coming and demanding that Clay do certain things or proof will leak that Monty was framed. The voice tells Clay to start a fight at lunchtime, but that he's not allowed to fight back. So Clay begs Zach to hit him and Zach initially refuses until Clay starts to taunt him. When the calls keep coming, Clay is forced to tell his girlfriend Ani what's going on. She tells him to ignore the calls, because there is no proof that Monty is innocent.

As punishment for Clay telling Ani, the next call sends him on a wild goose chase to supposedly get Monty's phone back, but it's just a burner phone. The calls continue into the Valentine's Day dance, where the voice ominously says, "Having fun with your girlfriend? Kiss her one more time before it's too late." Then the voice demands that Clay leave the dance and come to the boys' locker room. Clay was already on edge, but his experience in the locker room truly sends him over the edge. It's covered in what looks to be blood (but is probably just paint) and a bloody knife sits on the ground insinuating that some crime had occurred. Clay melts down at the sight of the red stains before grabbing the knife and going to the football field as the next call demands.

On the field, he sees Monty, barely alive and bleeding out. Clay tries to save him, but it's no use. He begins to sob. "I'm sorry," Clay says over and over again. Then Diego, a newly introduced football player and fellow student at Liberty, and the rest of the football team arrive on the field. Clay finally realizes it was just a fake bloody dummy on the field, not Monty. The members of the football team all hold up ringing phones, showing that they'd each figured out some kind of software to allow them to call Clay from Monty's number. Diego is shocked by Clay's intense reaction to the prank, and it makes Diego think that Clay is hiding something. "We own you," Diego warns.

The football team's prank on Clay likely started to get back at Clay for picking a fight in Episode 1. The team had made Monty jerseys to honor their fallen player, and seeing them sent Clay into a spiral where he began attacking the players in the cafeteria. But when Diego planned this prank, he likely had no idea how fragile Clay's mental state already was – or just how much it would affect him.

Diego likely never intended for the prank to be completely harmless, because he wanted revenge for the fight Clay started. But the joke caused more harm than the players may have thought. Clay found out who was calling him from Monty's phone, but his paranoia that someone will learn the truth about Monty's connection (or lack thereof) to Bryce's death is eating him up more than ever.