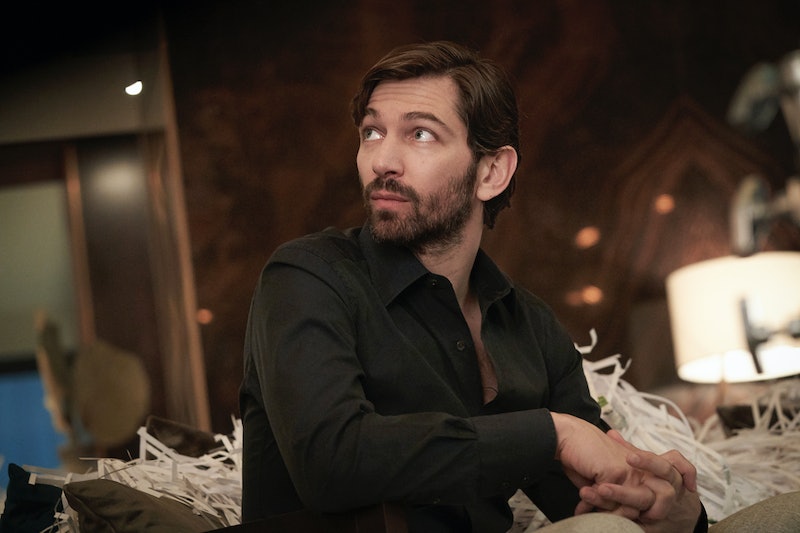 The big mystery on HBO Max's The Flight Attendant is who killed Alex Sokolov. Fans are starting to suspect the mysterious Miranda (played by Michelle Gomez), and are awaiting more clues in future episodes. But there's no need to wait, since the series is based on a novel. The Flight Attendant book ending reveals Alex's killer, and if the series follows the events of the book, we could have the answer of who killed him already. Major book spoilers — and possibly series spoilers — ahead.

In the book, Miranda's real name is Elena and she was working for a Russian spy named Viktor who ordered Alex's murder because Russian intelligence wanted information from Alex's computer. So Elena kills Alex for the information (which ultimately ends up not being helpful to them), but gets in trouble with her boss for leaving a witness behind — flight attendant Cassie (Kaley Cuoco). Elena didn't kill her because she figured she was too drunk to remember, and Elena didn't want to kill an American, because she's secretly a double agent working for the US. So Viktor dispatches Elena to kill Cassie once and for all, but the CIA wants Elena to bring Cassie to them. As Elena waits for Cassie in her hotel room, another Russian agent appears and kills Elena. He also tries to kill Cassie upon her return, but decides to stage his own death instead so he can leave the Russian intelligence community.

Cassie then gets a job with the CIA and works as a flight attendant when they need an agent on board. She also gives birth to a baby, fathered by Alex, named Masha. Becoming a mother (and CIA agent) helps her to get sober, and that's how the novel ends.

However, things may not unfold in the series exactly as they do in the book. As the Burlington Free Press points out, some significant changes have already been made from the book to the series — like moving the drama from Dubai to Bangkok, though author Chris Bohjalian told the outlet that he didn't mind the changes. Of course, changing the entire ending in the story's TV adaptation from the book's would be a pretty big switch-up, so there's a good chance that Alex's killer remains the same, or that only minor details are changed. So fans should keep an eye on Miranda (aka Elena) as the series unfolds.

More like this
George R.R. Martin Teased That ‘House Of The Dragon’ Is Inspired By The Anarchy
By Grace Wehniainen and Kadin Burnett
Everything To Know About The HBO Max & Discovery+ Streaming Service Merger
By Brad Witter
Every Horror Movie Reference In The 'PLL: Original Sin' Premiere
By Alyssa Lapid
An Ultimate Guide To The Music Of 'Rap Sh!t'
By Brad Witter
Get Even More From Bustle — Sign Up For The Newsletter