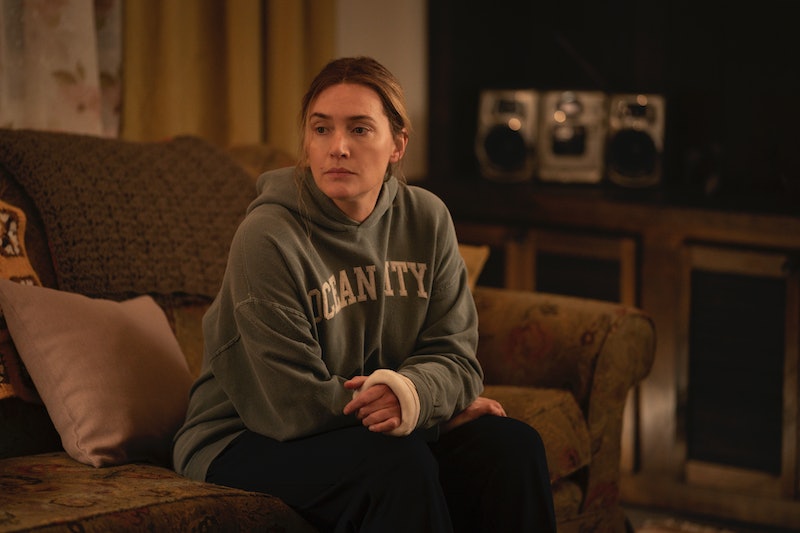 Spoilers ahead for the Season 1 premiere of Mare of Easttown. The town at the center of HBO’s Mare of Easttown is a Philadelphia exurb bathed in blue light and under constant threat of rain. Most of the blue-collar townsfolk fall on the spectrum of sadness: Kate Winslet’s Detective Mare Sheehan is mourning the loss of her son; her high school basketball teammate Beth copes with a brother who has substance use disorder; a 17-year-old girl, Erin, argues with her ex-boyfriend over the money to cover their son’s ear operation. Blue is also a mood. By the time Erin’s dead body appears naked in the icy creek water in the final moments of the series premiere, tragedy in Easttown feels inevitable. Who killed Erin? No one person jumps out, but everyone’s a suspect. Because in Mare of Easttown, writer Brad Ingelsby evokes a world so bleak you can imagine almost anything happening amid the desperation.

There are the usual suspects, of course. Erin’s father Kenny is a hothead who doesn’t respond kindly to even his daughter’s simple pleasantries and seems to resent the added expense of his 1-year-old grandson DJ. Erin’s teenage ex-boyfriend Dylan is another obvious candidate. The pair bicker during the custody hand-off, and hours before a hiker finds her body, Dylan and his new girlfriend Brianna lure Erin to a trail in Sharp’s Woods. Brianna, jealous that Erin’s been texting Dylan, catfishes, confronts, and assaults her, making the violent Brianna a suspect, too. But the motives here feel insufficient to the gravity of the crime. Resentful and unkind as Dylan may be, life as DJ’s father gets harder — not easier — without Erin. And Brianna’s anger registers as a way to pass the hours in a dead-end town. “You’re gonna get it when you least expect it, you dumb bitch,” she taunts Erin, sounding less like a killer and more like another teenage girl facing the same depressing prospects. Fighting over Dylan, a teenage dad who’s afraid of his own parents, is merely something to satiate her boredom.

The altercation between Brianna and Erin is interrupted by Mare’s daughter, Siobhan, and her friends, who come to Erin’s rescue but ultimately watch her wander into the woods alone to lick her wounds. If anyone who was in the woods the night of the murder is a suspect, then her saviors are, too — plus the considerable chunk of Easttown High’s senior class who gathered there to drink that night.

The notion that someone from this closed community killed Erin is sinister, but the threat of someone from beyond its borders is even more ominous. The episode opens with a woman’s shriek and a report of a ferret-faced Peeping Tom peering into bathroom windows from under his sweatshirt hood. Somehow, a person matching that dubious description is seen again, in the small hours of the morning as Mare drives home from sleeping with a college professor. The professor, played by Guy Pearce, is new to town — a drifter of another ilk. The episode’s timelines are purposely confusing. Based on what we know, it’s impossible to establish an alibi for any character. But about a year before Erin’s death, another young Easttown woman went missing and the case remains unsolved: could these tragedies be connected by something other than city limits?

The episode leaves us with few clues, just the haunting sense that there’s no town small enough to keep you safe. It’s Mare’s job to investigate everyone she knows to figure out who knows more than they’re revealing. Easttown is comprised of secrets, struggles, and regrets: a father who refused to lend his daughter his truck, unknowingly letting her bike to her death on a pink beach cruiser; a teen dad who watched as the mother of his infant son was assaulted; a detective who couldn’t solve a young woman’s disappearance before another was victimized; and a town that underestimated its own darkness. No matter who killed Erin, Mare of Easttown seems to promise, the blame for her death will be shared.

More like this
Everything To Know About 'And Just Like That...' Season 2
By Jack Irvin and Grace Wehniainen
'The Last Of Us' Episode Schedule Competes With The Super Bowl & Oscars
By Brad Witter
Melanie Lynskey Plays A “Ruthless Leader” In 'The Last Of Us'
By Brad Witter
Linda Ronstadt’s “Long Long Time” Plays A Pivotal Role In The Last Of Us
By Brad Witter
Get Even More From Bustle — Sign Up For The Newsletter
From hair trends to relationship advice, our daily newsletter has everything you need to sound like a person who’s on TikTok, even if you aren’t.