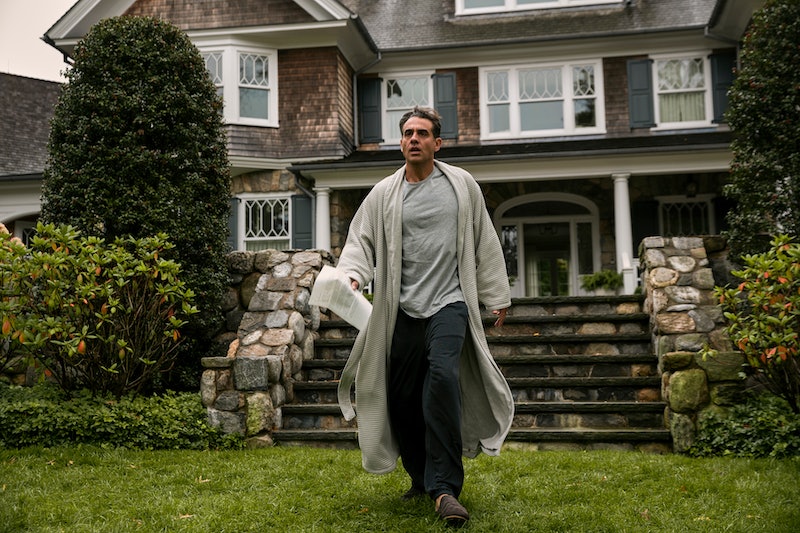 While inspired by the true story of an infamous New Jersey home, Netflix’s The Watcher still takes its fair share of creative license. Yes, it is a fact that the Broaddus family (changed to Brannock in the series) bought a suburban dream home that quickly became “a living hell” when ominous letters began arriving from someone calling themself “The Watcher.” In real life, however, the Broadduses never actually lived in the home, which they were finally able to sell in 2019.

The saga began in June 2014 when Derek and Maria Broaddus purchased the six-bedroom Dutch Colonial home located at 657 Boulevard in Westfield, New Jersey, aka the “Watcher” house, for nearly $1.4 million. Within days of closing, the couple quickly began renovations on their new family home, rather than moving in right away. Before the renovations were complete, the menacing, anonymous letters — which included disturbing references to their three young children — began arriving, and they didn’t feel safe moving into the home.

Instead, they moved in with Maria’s parents and continued to pay the mortgage and property taxes on 657 Boulevard. Six months after they received the letters, the Broaddus family decided to sell the home. Because rumors about the house and its stalker had already begun swirling, most of the preliminary bids came in well below the asking price, according to People.

Built in 1905, the house has only had a small handful of owners over the years. Before the Broadduses purchased the home, the Woods family lived there for 23 years. A one-time mayor of Westfield also previously occupied 657 Boulevard, per Jersey Digs.

After failing to sell the home, Derek and Maria tried to broker a deal with a developer to build two new properties on the lot. The Westfield Planning Board eventually shut down the idea amid public outcry. Shortly thereafter, they found a family to rent to but the tenants also continued receiving “Watcher” letters addressed to the couple. In 2015, the Broadduses also filed a later-dismissed lawsuit against previous owners John and Andrew Woods for failing to disclose that they’d also received a letter from “The Watcher” prior to them purchasing the home.

After five years, they finally sold the home for $959,000 in July 2019, resulting in a significant financial loss. According to a copy of a deed filed with the Union County clerk’s office obtained by NBC New York, the new owners Andrew and Allison Carr closed on the home on July 1. There’s been no word, however, if they’ve received any letters of their own since the “Watcher” was never caught.

More like this
'The Queen’s Gambit' Season 2 Tweet Wasn’t From Anya Taylor-Joy
By Mary Kate McGrath, Jack Irvin and Grace Wehniainen
Ashton Kutcher Wants Danny Masterson “To Be Found Innocent” In Rape Retrial
By Jake Viswanath
Netflix Shut Down 'Bridgerton' S3 Rumours About A “Very Dark” Storyline
By Bustle
All The ’70s Easter Eggs You Missed In 'That ’90s Show'
By Grace Wehniainen
Get Even More From Bustle — Sign Up For The Newsletter
From hair trends to relationship advice, our daily newsletter has everything you need to sound like a person who’s on TikTok, even if you aren’t.