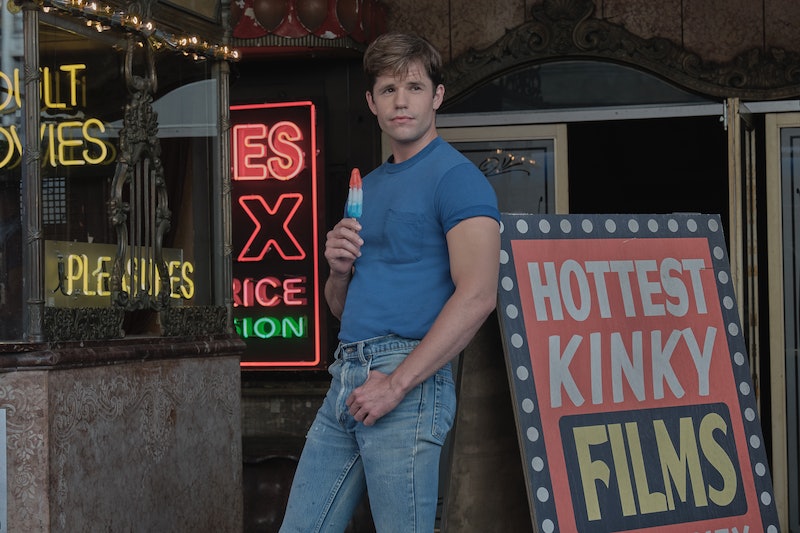 Back in 2018 — in the before times when we could gather in a theater — a star-studded cast came together to revive the 1968 play The Boys in the Band for the Broadway stage. The story follows a group of nine gay men in the pre-Stonewall era New York City who come together to celebrate a birthday. The production starred Jim Parsons, Zachary Quinto, Matt Bomer, Andrew Rannells, Brian Hutchinson, Michael Benjamin Washington, Robin de Jesús, and Tuc Watkins as the main cast. All have returned for the new Netflix film based on the play which is available on the streaming site now. But what about Cowboy? The Boys in the Band's beloved hustler couldn't be left out.

Actor Charlie Carver also returns to play Cowboy, the popular role that became a fan favorite. Carver nailed the role in the Broadway production and quickly became a highlight of the show. Cowboy is a male stripper and sex worker who serves as a "birthday gift" to Quinto's birthday boy Harold. Cowboy doesn't really have that many lines in the show or the movie but is definitely a memorable character. And even though he doesn't say much, playing Cowboy was actually extremely personal for Carver, who came out as gay in 2016, according to People.

The first film adaptation was made in 1970, shortly after the original 1968 Off-Broadway production. When the new 2020 film adaptation was announced, co-producer David Stone (who produced alongside Ryan Murphy) told Out, "The play was groundbreaking in its exploration of how gay men treated each other and how they were made to feel about themselves. And while some attitudes have thankfully shifted, it's important to be reminded of what we have overcome and how much further we still have to go. Everything has changed. And nothing has changed."

Carver first discovered The Boys in the Band back in high school. "I was so curious about gay stories,” he told Broadway.com. "[The play has] cultivated a lot of appreciation about how lucky I am to have grown up now. At the same time, there's something about these people. There's something about the relationships between these men in this play that is timeless and quintessentially queer. To discover that with a group of openly gay actors and find the love but also the shame and self-sabotage is intensely relevant because it's just human. We can all see ourselves in each of these parts."

Since Cowboy didn't have much to say or even a name, Carver made up a lot of his own backstory and gave him the name Tommy. "Cowboy is the only gay man in The Boys in the Band who isn’t struggling with shame, self-hatred, and internalized homophobia," The Gay Times wrote in a recent interview with Carver. "There’s a straightforwardness and warmth to Cowboy, where he’s just going to say exactly what is on his mind. I guess you could say he’s dumb, and that’s easy to make fun of, but he’s almost invincible because of it. He’s just representative of what’s about to happen, in some ways. 1969 is when Stonewall explodes and the gay rights movement begins, and I think Cowboy is emblematic of that," Carver told the outlet.