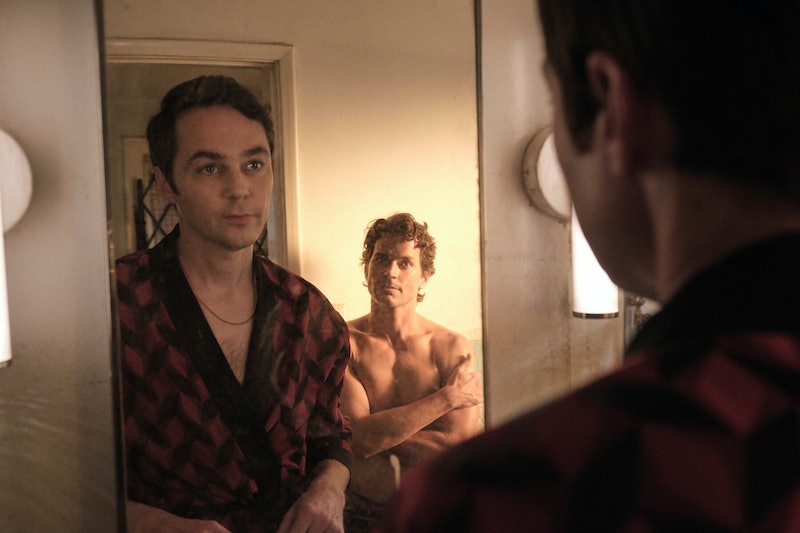 Netflix's The Boys in the Band is the second screen adaptation of Mart Crowley's 1968 Off-Broadway play of the same name. The Ryan Murphy produced movie premieres on Sep. 30 — more than 50 years after William Friedkin's 1970 film adaptation brought Crowley's original cast to the big screen.

Both films and the play center on the lives of several gay men living on Manhattan's Upper East Side. It's Harold's (Quinto) birthday, and six of his friends have thrown him a riotous party, which includes the hiring of a male sex worker named Cowboy (Charlie Carver). As the celebration nears, the host, Michael (Parsons), fields a phone call from his old college chum, Alan (Brian Hutchison): a straight married man.

As the men begin to drink and socialize, their individual and interpersonal problems bubble to the surface. Eventually the party kicks into high gear, and Michael suggests a drunken game that will force each guest to call the one person they've ever truly loved. Call after call lays bare the pain and pining of midcentury gay life. Michael waits anxiously for Alan to make his call and intercepts it, only to find that Alan has called his wife instead of a past lover. Brokenhearted, Michael ends the party — and the play — crying about an inner conflict that The Boys in the Band never explicitly states.

Rounding out the Netflix cast are Robin de Jésus as the over-the-top Emory and Michael Benjamin Washington as Bernard, the only Black man in Harold and Michael's friend group.

It's difficult to overstate The Boys in the Band's cultural impact. The Netflix adaptation's casting of today's top gay actors in lead roles continues the legacy of Crowley's play, which has always been inextricably linked to American gay culture. Jeff Lunden's Morning Edition obituary of Crowley, who passed away in early 2020, includes a quote from the playwright which sum up The Boys in the Band's tenuous position on the late-Sixties stage: "Nobody wanted the play; not even agents wanted to look at this play. They just thought it was pornographic and it was outrageous."

I also believe that one reason that Stonewall and Gay Rights happened — not the only reason, mind you, but one reason — is because of this play. After gays saw The Boys in the Band, they no longer would settle for thinking of themselves as pathetic and wouldn't be perceived as such any longer. Now that Michael and his friends had brought their feelings out of the closet, this new generation would dare to be different.

In a statement published by Enertainment Weekly producer Murphy calls The Boys in the Band "groundbreaking in its exploration of how gay men treated each other and how they were made to feel about themselves." Murphy goes on to say that, "while some attitudes have thankfully shifted, it’s important to be reminded of what we have overcome and how much further we still have to go."

The Boys in the Band is streaming on Netflix today.

More like this
Watch The Thrilling Teaser Trailer Of 'Shadow And Bone' Season 2
By Gretchen Smail and Jack Irvin
Nicola Coughlan Shared A Lady Whistledown Excerpt From ‘Bridgerton’ Season 3
By Grace Wehniainen, Alyssa Lapid and Sam Ramsden
What’s New On Netflix: Ana De Armas’ 'Blonde' & A Nick Kroll Special
By Arya Roshanian
Here’s Everything Coming To & Leaving Netflix In October
By Jake Viswanath
Get Even More From Bustle — Sign Up For The Newsletter