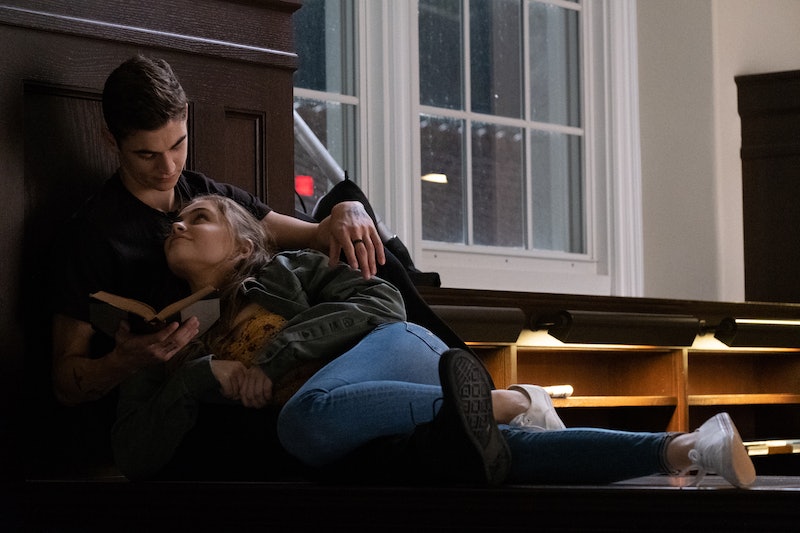 If you loved Fifty Shades of Grey and have been on the lookout for another steamy, romantic film series, you're in luck. After We Collided, out October 23, started out as One Direction fanfic on published on Wattpad, about a college freshman named Anna who falls for "bad boy" Harry. When the story was turned into a novel, that then became a series, the name of Anna's love interest was changed to Hardin Scott. As you may have guessed, Harry Styles himself isn't playing Hardin in After We Collided, but there's another familiar British guy taking on the role.

In the film adaptation, Hardin is played by Hero Fiennes-Tiffin. His name might not sound familiar (yet!), but you've definitely seen him before — and playing the bad boy is hardly new territory for him. When he was a child actor, Fiennes-Tiffin had his first big role in Harry Potter and the Half-Blood Prince, playing young Tom Riddle. And, as you might've guessed from his last name, he's actually Voldemort actor Ralph Fiennes' nephew.

But, in an interview with USA Today, Half-Blood Prince director David Yates assured readers that while it wasn't Fiennes-Tiffin's family connections that got him the role. "The fact that he's related to Ralph wasn't the primary reason for choosing him," explained the director. "It was an advantage that he looked very similar to Ralph. Of course, that was useful. But primarily I went for Hero because of this wonderful haunted quality that seemed to bring Tom Riddle alive on-screen for us."

The resemblance is uncanny, right?

But two years before portraying the young version of the villain, Fiennes-Tiffin made his acting debut in a role far different from Hardin and Voldemort. He played Spartak in the British dark comedy Bigga Than Ben, about Russian backpackers who try to illegally make money in London, starring alongside Westworld's Ben Barnes.

He also appeared in British war drama Private Peaceful, about two brothers growing up during World War I. Fiennes-Tiffin portrayed the young version of one of the brothers called Charlie.

In addition to his film work, he's had a couple of TV roles too. He appeared in the miniseries Safe in 2018 and an ITV miniseries called Cleaning Up. But while his acting career has been busy since his Harry Potter role, After marks his first big starring role, introducing him to new fans.

In a recent interview with Wonderland, the actor spoke about the challenge of portraying a character who does plenty of questionable things and is so unlike who he actually is in real life. "He’s definitely a controversial one,” the actor noted. “I definitely learned how not to judge my character, because there are times when you want to. You know when you’re screaming at the screen in a film? I felt like Hardin is like that a lot. But also that’s great to play as an actor because it’s that kind of illogical, impulsive stuff that you really have to get into to do it.”

Fiennes-Tiffin might've been best known for playing the baddest wizard pre-After We Collided, but now he gets a chance to re-introduce himself in a role unlike any of his previous ones.