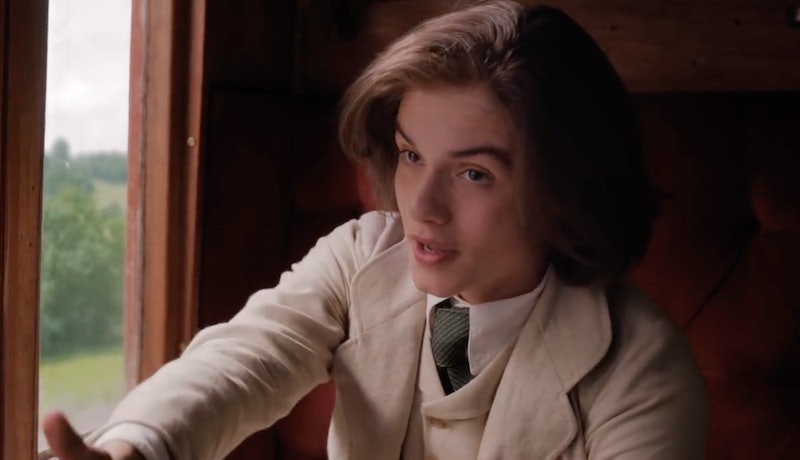 Netflix is bringing a new perspective to the Sherlock Holmes franchise with Enola Holmes, a film adapted from Nancy Springer's young adult novel series. The film stars Millie Bobby Brown in the titular role and opposite the Stranger Things star is Louis Partridge, who plays Lord Tewksbury, a runaway viscount.

In the film, Enola (Brown) finds herself at the center of a mystery after her mother, Mrs. Holmes (Helena Bonham Carter), vanishes. Her brothers — the legendary detective Sherlock Holmes (Henry Cavill) and the equally clever Mycroft Holmes (Sam Claflin) — quickly hop on the case, but not before calling Enola's upbringing into question.

Brought up to be just as clever, daring, and skilled as her brothers, Enola takes her mother's disappearance into her own hands, running away from home to find her. Along the way, Enola finds an ally in a fellow runaway, Lord Tewksbury (Partridge), who accompanies her on her case.

Relatively new to American audiences, Partridge has several film credits to his name, mostly shorts and television series, according to IMDb. The U.K.-born 16-year-old played Piero de' Medici in Medici, and starred as G-Man in Paddington 2.

Per GMA News, Partridge shared a little bit about what it was like to work with Brown at a media roundtable. "I did all of my scenes with her, a lot of time, of shoots with her, so much time, and I think that really helped to build this relationship off screen and to then bring on to it," he revealed. "[I hadn't] seen Stranger Things, which helped me because I didn’t see her as Eleven. I quite liked it that way. I wasn’t quite nervous to meet her which made it really easy to build a relationship with her.”

Partridge also recently shared his hopes for his character, who only appears in the first book of the six part series. "Towards the end of the film, he grows, he takes on more responsibility, which is kind of nice," Partridge told Girlfriends of his desire to participate in a sequel, if Netflix were to green light one. "So I'd like to see him keep some of that [and] take something from the last film and grow even more but also see his innocence and little flickers of that."