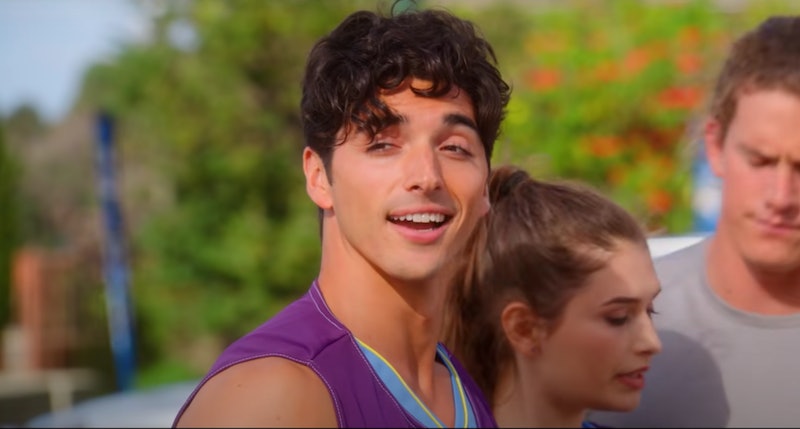 The Kissing Booth, Netflix's high school dramedy of best friends and boyfriends at odds, was a surprise mega-hit for the streaming service. The wildly popular movie returns on July 24 with a sequel, The Kissing Booth 2. Everyone from the original is back: School hunk Noah and Elle are still together, Elle and Noah's brother Lee begin senior year as friends again, and the OMG girls are still drooling over the hottest guy in school. But with Noah at Harvard, the guy catching their eye is Marco, a confident new student who seems pretty interested in Elle, even if only to make fun of her. So who plays Marco in The Kissing Booth? Taylor Zakhar Perez is a real-life charmer whose on screen casualness hides a hard-working performer.

The young actor has a short film and TV resume heavy on handsomeness, with appearances on The Young and the Hungry as an all-grown-up little brother, and Awkward. as "Hot Guy", so his casting as the new dreamboat everyone wants to be a kissing booth VIP isn't too surprising. But the IMDB brevity is also because Perez didn't set out to act until later in life.

Perez is the sixth of seven siblings in his family. He grew up in Chicago's South Side, and as he mentions on the Kahnversations podcast, he was hustling from an early age. He detailed cars in his dad's auto body shop as a kid, and at just age 13 worked lights for a local theater production of Annie his sister performed in. His first encounter with the camera was as a model, appearing in ads for Walgreens and CVS. Perez was inspired to try his hand at the gig after discovering photos of his mom and aunt's brief career as Miller Lite models. The enterprising preteen set up his own booth to take headshots and sent them out to modeling agencies himself.

At the same time, the driven Perez was also lifeguarding. Swimming was an enormous part of the actor's life, even landing him a college scholarship to Fordham. Asked what drew him to the sport he told the Kahnversations podcast, "I think it's the one thing my dad didn't know anything about, so he couldn't coach me on it...what can I know the most that my dad doesn't know...Swimming!" Perez also said he wasn't very coordinated as a kid, and didn't want to get hurt in a full-contact sport like football. "I was like, "swimming is nice. You don't get hurt swimming."

But by the time he got to college, the smell of chlorine made him want to run out of the room. Originally majoring in political science and economy, Perez switched to majoring in Spanish culture and community, reflecting a growing interest in Latinx cultures beyond his own Mexican background. He tossed on Film and Television as a minor — "I still don't understand Citizen Kane", he told Kahnversations — but that minor led to some major life changes.

After a few guest appearances on shows like iCarly and Code Black, Perez landed a starring role in Embeds, a Megyn Kelley executive-produced TV series about cub reporters trailing a long-shot Republican candidate during his Iowa primary campaign. Produced for now-defunct streaming site go90, the show only had one season. But the experience inspired the ambitious Perez to produce his own show, High Expectasians, for Funny or Die.

Now with his first feature starring role in The Kissing Booth, Perez is likely to become a better known household name. The extra attention might clear some of the mystery surrounding the actor, including whether he's seeing anyone. Perez hasn't mentioned a significant other anywhere, nor is there a special someone popping up on the actor's Instagram (unless you count adorable dog Jack). It's clear Perez is keeping very active, with hikes to the top of cliffs and Kilimanjaro appearing all over his social media. But what heights he'll reach after The Kissing Booth 2 remain to be seen.

More like this
Here’s Everything Coming To & Leaving Netflix In February
By Jake Viswanath
Stephen Graham & Steve McQueen Are Working On A Wartime Drama
By Darshita Goyal
Pamela Anderson’s Dating & Marriage History Could Be Its Own TV Series
By Jake Viswanath
Ashton Kutcher Wants Danny Masterson “To Be Found Innocent” In Rape Retrial
By Jake Viswanath
Get Even More From Bustle — Sign Up For The Newsletter
From hair trends to relationship advice, our daily newsletter has everything you need to sound like a person who’s on TikTok, even if you aren’t.