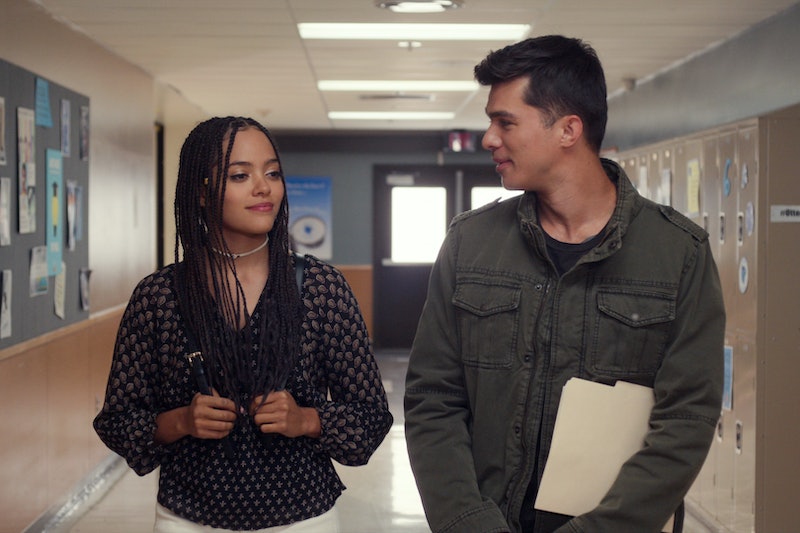 Season 2 may be Trinkets' final chapter, but there are still a few new characters who will shake up the story. Among the new faces in the cast is actor Andrew Jacobs, who plays Moe's brother. And according to series creator Kirsten “Kiwi” Smith, the character will bring some fresh drama home with him from military school. "He’s wonderful, but he’s creating a lot of conflicts for Moe (Kiana Madeira) at home with her mom, and he also knows Tabitha (Quintessa Swindell) because Moe and Tabitha used to be really close friends a while back,” Smith recently explained to Hollywood Life. "He and Tabitha end up kind of forming an unexpected connection that is complicated in some way."

Before joining Trinkets, 26-year-old Jacobs made his mark in the horror film genre, starring in 2014's Paranormal Activity: The Marked Ones and 2017's Lasso. "Being an actor, especially when you're first starting off and a beginner, you don’t necessarily get to choose your genre, I guess you could say," the Mexican-American actor and Freddy Kreuger fanatic explained to PopHorror in 2017. "It just happened to be the first thing I went for, and I enjoyed it a lot. I’ve always been a fan of the genre, so I’m definitely not going to say no when the opportunity is given to me."

Jacobs' artistic skills also extend beyond acting. He's been a breakdancer since he was young, and even once hoped to pursue a professional career in dance. But after realizing there's a shelf life to a dance career, he told PopHorror that he "tried to think of something that would last [him] longer." After a few months of giving acting a try, he landed his Paranormal Activity role and decided to stick with it.

As for her life outside of work, Jacobs was born in Los Angeles and raised in foster care before his mother adopted him when he was about nine or 10. According to the bio his rep submitted to IMDb, Jacobs' birth family had gang ties and he "inevitably made bad choices." The birth of his son in February 2011, however, "convinced him to change his ways."

Given Moe and Ben's own tumultuous upbringing, it sounds like Jacobs had a lot to bring to his performance in Trinkets.