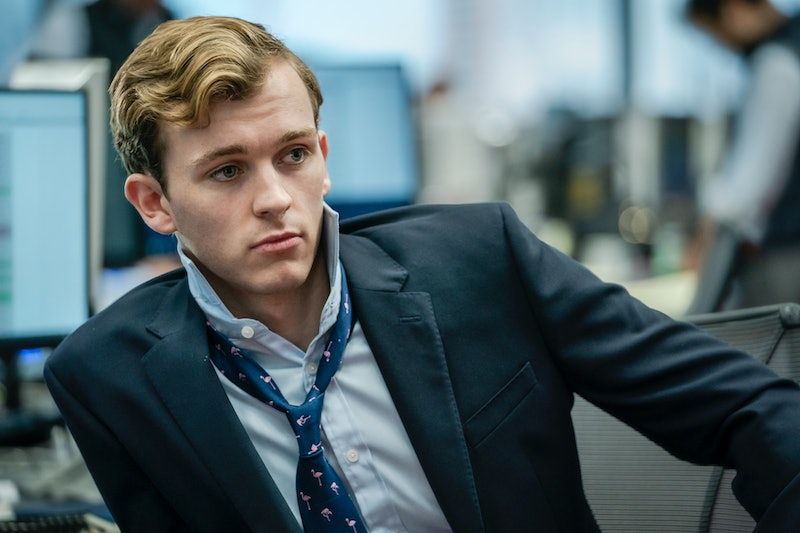 In HBO's drama Industry, five young graduates compete for a coveted position at a prestigious London bank after the 2008 financial collapse. Among them is party boy Robert, who is desperate to nab the spot and rise above his working class background. Harry Lawtey plays Robert and like the rest of the cast, Industry marks his first major TV role.

A graduate of Sylvia Young Theatre School and Drama Centre London, Lawtey previously appeared in Netflix’s The Letter for the King, ITV’s Marcella, and the film City of Tiny Lights alongside Riz Ahmed. He also starred in a Burberry campaign and played a heartbroken single in Sam Smith's "Too Good at Goodbyes" music video. In addition to his acting skills, Lawtey plays the guitar, sings, and can perform ballet.

Speaking about his latest role, Lawtey told The Rakish Gent that he was initially drawn to Industry's "fresh, vibrant, and sharp" script and Robert's hidden depths as a character. "Robert is very charismatic and quite charming," Lawtey explained. "He has a lot of bravado and probably thinks that those qualities are really well suited to a life in banking." That said, Lawtey noted his character has a skewed idea of success and tries to mask the "insecurity of being a lost boy" while seeking validation from (unbeknownst to him) the wrong people.

Unlike the more privileged characters in the series, Robert had to fight to be on the trading floor at Pierpoint & Co. "He’s not from the same socioeconomic background as everyone else on the show," Lawtey explained to AIPT Comics. "He’s really had to work and be lucky to get where he is, and he’s the kind of person that has been let down by people before. Let down by family before." What also makes Robert stand out is that "he leads with his heart rather than his head," Lawtey said.

Though these qualities resonated the most with Lawtey, as he told Bello magazine, he's actually dissimilar from his onscreen character. "It’s funny, because there is so much about Robert that I can’t relate to. I certainly can’t party as hard as him!" In his interview with AIPT Comics, Lawtey admitted he'd be "useless" at banking. He went on to add, "I really think I’d be rubbish at it. It’s funny though, I used to joke around saying I tried to become an actor so I didn’t have to wear a suit and sit at a desk all day, which is what we all ended up doing for six months. It was very much pretend."

Taking everything he now knows about Robert into consideration, Lawtey imagines his character's arc will win everyone over. When he first auditioned for the role, he had only read the first two episodes, so he played Robert as more of a jerk and "a show off." He told AIPT Comics, "The casting director, Julie, was saying, 'No, no. He’s not like that. He’s very different today. He’s really nice.'" But Lawtey noted that's the joy of a good script: "Good character-driven writing is having first impressions challenged and deciding where you want to place your loyalty and allegiance to people to root for." In the end, Lawtey hopes fans will notice how his character evolves and "grow to like him and root for him."