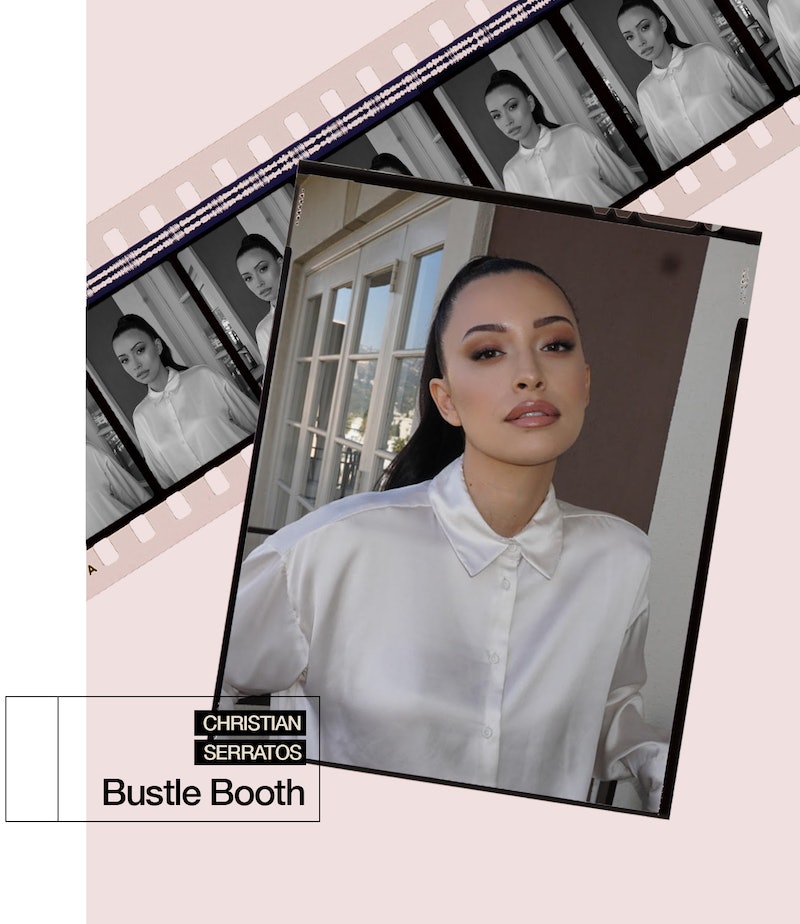 Christian Serratos works hard. So hard, in fact, that she started preparing months before even landing the part as Selena Quintanilla in Netflix’s new biographical drama Selena: The Series. She scoured the internet for old videos of the beloved late singer and began working with a dialect coach, vocal coaches, choreographers, and a personal trainer, the 30-year-old actor tells Bustle.

When she was eventually cast in the role, Serratos left The Walking Dead’s ninth season early in order to begin work on Selena and fully commit herself to the part; more than anything, she wanted to do right by the icon she grew up listening to. “I knew what an incredible fan base she had — me being a part of that fan base. And I just wanted to honor her and her legacy, and her family, and her fans as much as I could,” Serratos says of Selena, who was tragically murdered in 1995 at the age of 23. “I've never played a living person before, so obviously there's a lot more care and attention [paid] to her and her life and everything that makes up a human being.”

Like Selena, Serratos started performing at a young age, becoming a competitive figure skater and acting in Hollywood before she was 5. She didn't always consider acting her calling. “I think at a certain point, it was to pay the bills,” she confesses. “But it became really fun for me and therapeutic, and so I found myself falling in love with it every day.”

Serratos built her career with turns in Ned’s Declassified School Survival Guide and the Twilight movies, though her most prominent role is as Rosita Espinosa on The Walking Dead. The character is a prime example of the types of women she likes to play: capable, strong, and able to take care of themselves and others. That’s not unlike Serratos, who says she goes “crazy” if she takes a break from work and prefers to spend her free time tracking the evolution of Selena’s dance moves. (“It went very hip-hop and ‘80s for a minute. And then it became a little more flamenco and cumbia.”) She doesn’t think she has the stamina to ever become a musician herself, but she’s hoping to find more powerful stories like Selena’s in order to inspire other Mexican American women, including her 3-year-old daughter.

“I just love how honest [Selena] was, how graceful she was and how determined she was to accomplish her goals. And I think those are great qualities for anybody to model,” says Serratos, who appreciated getting to channel Selena’s grace and determination for her first leading role. “[As a Mexican American], I related a lot to having to create your own path and not often being offered opportunities the same way other people were offered opportunities. But people in my community are resilient and find a way.”

Get to know more about Serratos — including what other Netflix show she's currently obsessed with — in her Bustle Booth questionnaire below.

"No no, that wasn't a question," by Meryl Streep as Miranda Priestly in The Devil Wears Prada

I wouldn't say I have a celebrity "idol," but I have a lot of people I respect and would love to work with

Either The Real Housewives of Beverly Hills or Survivor

More like this
On 'The Handmaid’s Tale,' Christine Ko Fights Back
By Gretchen Smail
Watch The Thrilling Teaser Trailer Of 'Shadow And Bone' Season 2
By Gretchen Smail, Jack Irvin and Sophie McEvoy
Mike Flanagan Teases 'The Midnight Club' In This Exclusive, Creepy Clip
By Grace Wehniainen
Devi Is Going To Meet A “Smoldering Bad Boy” In ‘Never Have I Ever’ Season 4
By Jack Irvin and Gabrielle Bondi
Get Even More From Bustle — Sign Up For The Newsletter