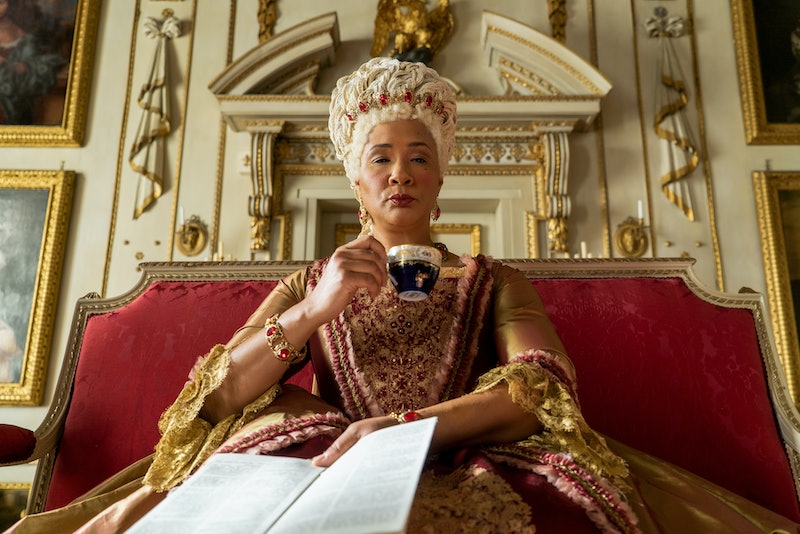 Out of all the characters in Bridgerton, Queen Charlotte is by far the most memorable. Not only does the monarch wear some truly exquisite outfits but she has the killer dialogue to match. But who’s the actor behind the character, and what else should we know about her?

Queen Charlotte is played by Guyanese-British actor Golda Rosheuvel, who will be super familiar to theater fans for her roles on the West End in The Curious Incident of the Dog in the Night Time and We Will Rock You, as well as productions for the Royal Shakespeare Company like The Tempest, Julias Caeser, and Anthony & Cleopatra.

You may also recognise the actor on a number of shows prior to Bridgerton, including episodes in Luther, Rev, two characters in Silent Witness, and most recently in the second series of Death in Paradise.

And Rosheuvel is also no stranger to the big screen, having appeared in William Oldroyd’s Lady Macbeth as Agnes in 2016. However, it was her role as Othello in Gemma Bodinetz’s production of the play that was the most important to her as a Black, gay, female actor, she told the Guardian.

“I’ve had some great roles and worked with fantastic directors in great venues, but this is the first time I’ve played the lead. Why is that? I don’t know,” she continued. “I could jump on a bandwagon and say it’s because I’m Black, I’m a woman, and gay. But maybe it’s also because my career has always been very eclectic [...] I’m always looking for things that interest me, that are different. You don’t employ me if you want beige, I’m all about bright colours.”

That’s certainly true of Queen Charlotte, who wore the boldest outfits on Bridgerton. “There were so many layers to Queen Charlotte, and being a Black queen was just one of them,” the actor told Essence. “I think having somebody of colour at the top of the food chain enables us as artists and as a Black community.”

Rosheuvel was also excited to be playing a role that “didn’t completely revolve around [her] being Black.” Born to an English mother and a South American father, this was the first time she could “tap into” her mother’s side, she told Essence. “So when channelling Queen Charlotte, I thought about my mum. I don’t know whether my mum pouted, but definitely channelled her with great pride and honour.”

More like this
Twitter Is Burning As Phoebe Dynevor Reveals Daphne’s 'Bridgerton' Exit
By Sophie McEvoy
Claire Foy Spoke Out About 'The Crown's Gender Pay Gap
By Sam Ramsden
Olivia Colman Stars In First-Look Trailer For BBC's 'Great Expectations'
By Sabah Hussain and Sam Ramsden
Alan Carr's 'Changing Ends' Is A Witty Sitcom Based On His Own Life
By Darshita Goyal
Get The Very Best Of Bustle/UK
Sign up for Bustle UK's twice-weekly newsletter, featuring the latest must-watch TV, moving personal stories, and expert advice on the hottest viral buys.