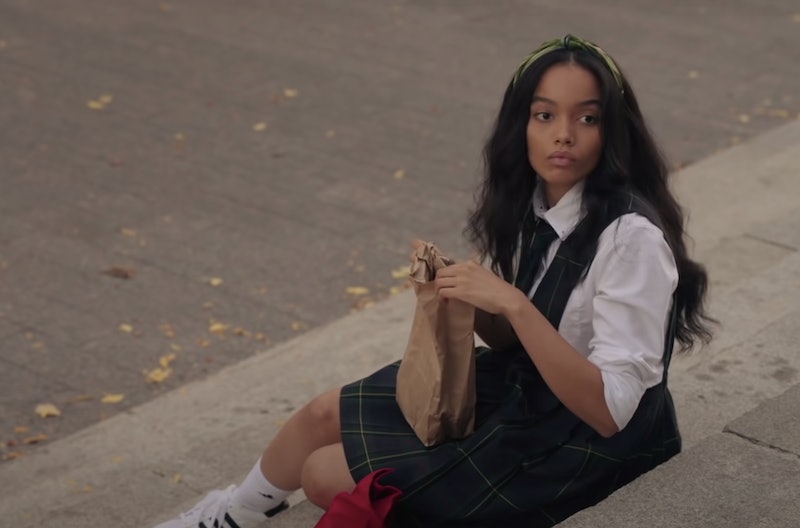 On the HBO Max Gossip Girl reboot, Zoya Lott is the fish out of water. More specifically, she’s the scholarship kid among her Black Card-wielding classmates, the rent-controlled classic six swimming among her peers’ penthouses. Honestly, it might be more comfortable to be an actual fish out of actual water than to be Zoya Lott. The high school freshman — who is a little bit Dan mixed with some Vanessa, for those looking for an OG Gossip Girl analogue — is played by 18-year-old Whitney Peak in one of her first starring roles.

“I would literally shake in front of the entire class because I was just so nervous,” Peak told Interview about past attempts at school plays and public-speaking. Rather than believing herself destined to become a big star, Peak says booking HBO’s Gossip Girl was the first moment she felt like acting might be her ultimate career path. “It’s amazing and I’d totally love to do that if I was given a chance to.”

If Peak didn’t always see herself as an actor, perhaps it’s because she didn’t have the most conventional path to Hollywood. She was born in Kampala, Uganda, and attended a strict boarding school until her family moved to Vancouver when she was 10. She has described the move positively — “there was a lot more opportunity [in Canada], a lot of freedom.”

That included the freedom to play around with new hobbies. She sent an audition tape to the Disney Channel after noticing an open casting call. The advertisement she’d seen turned out to be a scam, but she liked doing making the tape and kept auditioning, moving from being cast in background roles to speaking parts. If Peak looks familiar, perhaps you recognize her as Judith on Netflix’s Chilling Adventures of Sabrina, one of her biggest roles to date. She also starred in the AppleTV+ series Home Before Dark.

And what Peak lacks in experience, she makes up for in devotion to Gossip Girl. She was a fan of the series before she even auditioned for it. Now, she’s seen every episode three times through. Booking Zoya was a pinch-me moment. “When I auditioned, I was like, ‘There’s no way I’m going to get this. I’m 16. I don’t really have that much experience.’’ In the end, that wasn’t a liability. Who knows? Maybe it’s exactly what makes Whitney Peak suited to playing a character slightly out of sync with her surroundings.

More like this
The 'Gossip Girl' Reboot Creator Is “Looking For A New Home” To Air A Potential Season 3
By Brad Witter
'The Last Of Us' Star Bella Ramsey Almost Didn’t Take The Role Of Ellie
By Grace Wehniainen
The 8 Best Aidan Shaw Moments On 'Sex And The City'
By Grace Wehniainen
'The Last Of Us' Video Game Revealed Tess’ Fate In The HBO Series
By Brad Witter
Get Even More From Bustle — Sign Up For The Newsletter
From hair trends to relationship advice, our daily newsletter has everything you need to sound like a person who’s on TikTok, even if you aren’t.