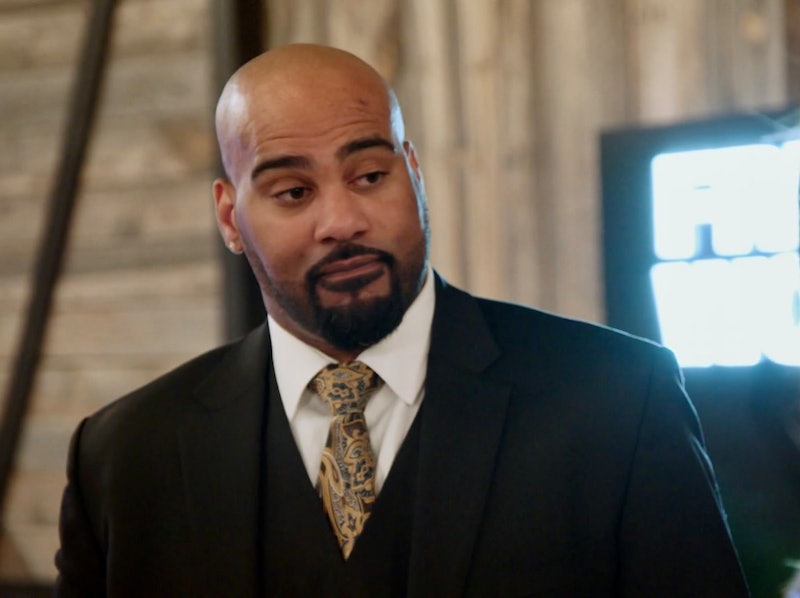 While meeting Meredith Marks for the first time in The Real Housewives of Salt Lake City Season 2, Lisa Barlow’s friend Cameron Williams had a cryptic warning about Mary M. Cosby: “Be careful.” Williams described attending Cosby’s Faith Temple Pentecostal Church for seven years, saying that he’s now “thankfully ... out of that situation” and “had to walk away” from the church after witnessing Cosby — whom he used to be “extremely close” to — and her husband, Robert Cosby Sr., do some “very harmful” things to their congregants. Pressed by Marks for more information, the Salt Lake City community leader replied simply, “That’s Mary’s story to tell.”

Viewers will finally get more information about Williams’ comments in Episode 11 on Nov. 21. As previewed in episode promos, Barlow tells Marks that her friend suffered “extreme religious trauma” while attending Cosby’s church. Because Marks was unconvinced by the “abstract” accusation, Barlow revealed more, claiming that Williams had mortgaged his home and given the Cosbys $300,000. In a later scene from Bravo’s RHOSLC first look, Williams also says to Barlow, “Is it a cult? Yes. Does she call herself ‘God’? Yes.”

When other ex-church members made similar allegations of Cosby running a cult in a September Daily Beast article, Mary’s attorney refuted them in a statement, saying the suggestion that she calls herself “God” is “extremely offensive and has no basis in reality.” He also maintained that “all religious institutions, including the Faith Temple Pentecostal, accept donations from their parishioners; however they don’t force parishioners into poverty to make such contributions.”

In a tragic turn of events, Williams died in June after filming RHOSLC. He was 33 years old, and among the loved ones he left behind was fiancée Indya and a twin sister, Morgan. Although his cause of death has not been made public, Williams posted on Instagram in May that he’d just had his third brain surgery within three weeks after spending “almost the entire month” in the hospital. His obituary also noted that an “unexpected brain tumor at the age of 19” had ended his track career at the Oklahoma University, where the EverWoke founder and CEO had been recruited on an athletic scholarship.

While paying tribute to her late friend on social media, Barlow listed several of Williams accomplishments, including his track record as a civic leader, volunteer, and advocate, who, among many other things, served as chair of the Utah Black Chamber of Commerce. “He loved building, helping, growing and has been an amazing brother to me,” Barlow wrote, in part, on June 3. “He is accomplished, kind, smart, creative- a leader and my friend: He is loved. He will be missed. Proud to call you my friend and brother.”

In a separate Instagram post from the same day, Barlow also shared a message Williams sent her the day RHOSLC premiered. “It made me cry,” she noted. “He was always trying to motivate and help everyone.”

Although RHOSLC surely has plenty more bombshells left to drop about Cosby’s church, it seems clear where Barlow stands on the matter. “I believe him. I believe his feelings,” she told Page Six of her late friend in October. “I believe he was an amazing person. I believe he had an amazing heart. It’s important for people to hear his side and what he went through because it might be healing and helpful for people to hear what Cameron said to me.”

More like this
RHOP’s Robyn Dixon Explained Why Juan Paid For Another Woman's Hotel Room
By Brad Witter
'RHOSLC' Star Jen Shah Refuses To Do A Post-Sentencing Interview With Andy Cohen
By Brad Witter and Jake Viswanath
Andy Cohen Apologized To Larsa Pippen After A 'RHOM' Season 5 Reunion Dust-Up
By Brad Witter
'RHOP' Stars Robyn & Juan Reportedly Got Remarried & Filmed The Ceremony
By Brad Witter
Get Even More From Bustle — Sign Up For The Newsletter
From hair trends to relationship advice, our daily newsletter has everything you need to sound like a person who’s on TikTok, even if you aren’t.