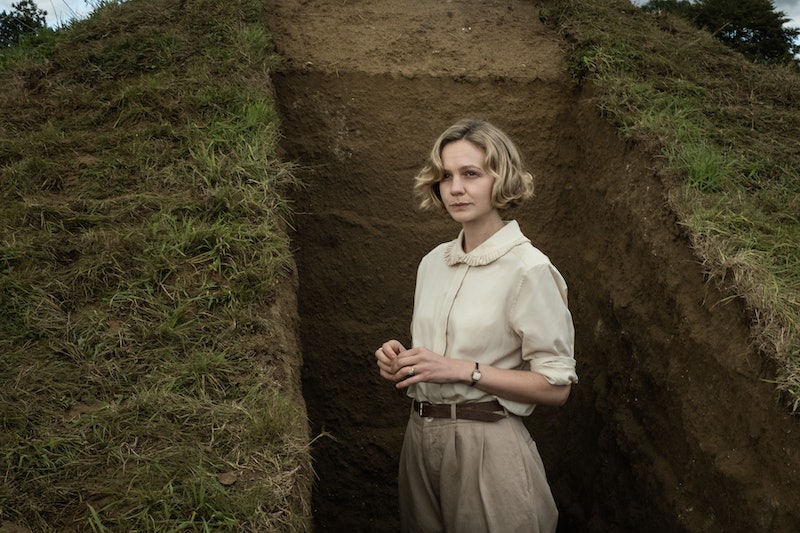 Carey Mulligan certainly has quite the range. Earlier this month, she wore candy-colored nails, and bright, feminine clothes in the highly-stylized revenge fantasy Promising Young Woman. And now, on the seemingly opposite end of the spectrum, she stars in the new Netflix film The Dig as English socialite Edith Pretty, donning a short blonde bob and aging makeup.

The Dig, now streaming on Netflix, follows the true story of the 1939 excavation of an Anglo-Saxon burial ship at Sutton Hoo, an archeological discovery that became one of history's most significant finds. Pretty, a wealthy widow, always had a hunch about some large mounds on her vast property. So just before England went to war with Germany, while the country's prestigious archeologists were busy protecting England's museums, Pretty hired amateur excavator Basil Brown to dig up her fields. Together, they unearthed 7th-century treasures that would change much of what Britons thought they knew about the Dark Ages.

While Mulligan learned of the Sutton Hoo discoveries in school as a child, she had never learned of Pretty, the blazing female archeologist. "I'd never heard her name before," Mulligan said in the film's press notes. "The character was so compelling, but diving into her real life was extraordinary. She was so beyond her time as a woman at the beginning of the 20th century. She was well-traveled and educated and generous throughout her life."

And even outside of the Sutton Hoo discovery, Pretty had a remarkable life. She served with the Red Cross during World War I, worked as a magistrate, and accompanied her father to archeological sites in Egypt and Pompeii, which is what sparked her interest in archeology, according to the British Museum.

At 35, Mulligan is quite young to be playing Pretty, who at the time of the Sutton Hoo discovery was 57 years old. "She married very late," Mulligan tells Sky News. "She was 42 because she refused her husband's offers of proposal for so long. And she didn't have a kid until she was 47, and then four years later, her husband died." But that all adds to Pretty's trailblazing reputation for bucking the conventional roles of women at the time.