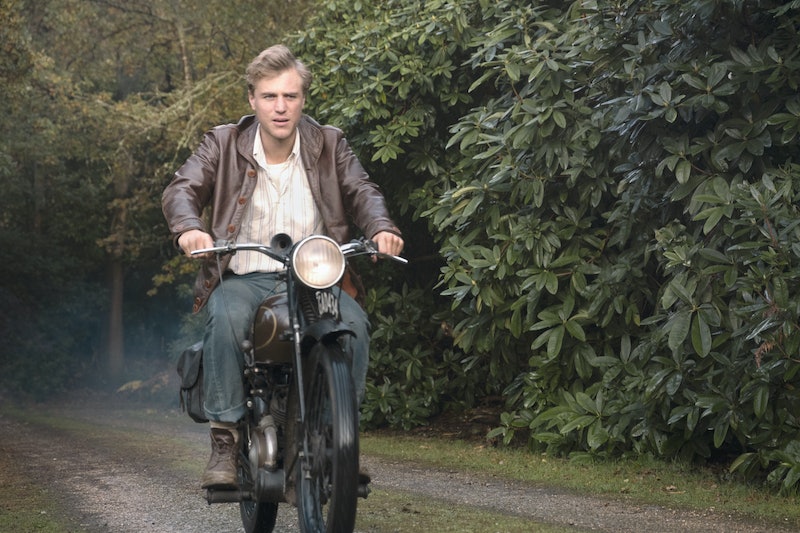 Based on John Preston's 2007 novel of the same name by, Netflix’s latest historical drama The Dig tells a reimagining of the excavation at Sutton Hoo. Chronicling the beginning of the excavation up until the beginning of the Second World War, the film stars Carey Mulligan, Ralph Finnes, Lily James, and Johnny Flynn. Flynn plays a photographer and RAF pilot who steals the heart of James’s Peggy Pigott, but who was Rory Lomax and what role did he play in the actual Sutton Hoo dig?

In the book, Preston's author’s note states that “certain changes have been made for dramatic effect.” One of these changes was the introduction of Lomax, who is the only fictional character in the story. As the imagined cousin of Edith Pretty (played by Mulligan), Lomax joins the dig after Pretty rejects local archaeologist James Reid Moir.

An RAF pilot and photographer, Lomax fills the role of the two real-life photographers at the site (Mercie Lack and Barbara Wagstaff), as well as being a symbol of the thousands of British servicemen preparing to go to war in the summer of 1939. “My character is a vehicle through which you go: ‘Oh my God, he’s this young, emblematic character, a symbol of the young men that are about to go to war’,” actor Johnny Flynn told Variety.

“And in my research, I was also reading a lot about young pilots’ experiences of going off to fight in the Battle of Britain, and you learned that nearly all of them died within the first six months of the war,” Flynn adds.

Rory is also central to a subplot within The Dig – a romance between him and archaeologist Peggy Piggott (Lily James). Both in the film and real-life, Peggy was unhappily married to Stuart Piggott. However, their timeline of marriage and divorce is altered slightly in the film, as Radio Times points out: “[Preston and scriptwriter Moira Buffini] I think made this fantastic device with Rory as somebody who allows you to see Peggy,” Flynn explained to Decider. “You get to see Lily James’s character through his eyes, and you get to realise she’s not happy in her marriage.”

So while Rory is an entirely fictional aspect in The Dig's portrayal of Sutton Hoo, he stands an important reminder of the freedom Britons felt in the summer of 1939, and the lives that would eventually be lost.

You can watch The Dig on Netflix.

More like this
Yes, You Can Stream ‘To Leslie’ In The UK Now
By Sam Ramsden
Jemima Khan Used Her Own Life As Inspo For 'What’s Love Got To Do With It?'
By Darshita Goyal
Gerard Butler Insisted On Adding This Pivotal Scene To 'Plane'
By Catharina Cheung
You’ll Definitely Recognise Isadóra Bjarkardóttir Barney’s Mum
By Maxine Harrison
Get The Very Best Of Bustle/UK
Sign up for Bustle UK's twice-weekly newsletter, featuring the latest must-watch TV, moving personal stories, and expert advice on the hottest viral buys.