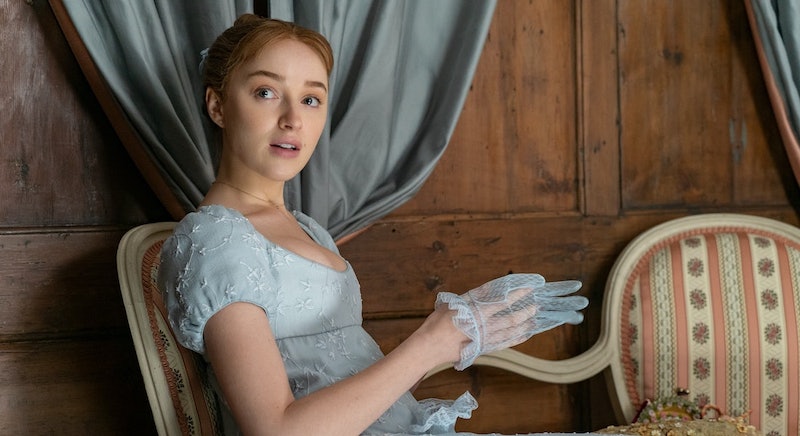 In Netflix's Bridgerton, the elite Bridgerton siblings navigate the trials of the Regency-era marriage market — and they have a lot of sex (like, a lot). For actor Phoebe Dynevor, who plays the lead role of Daphne Bridgerton, reclaiming period pieces by showcasing women as multidimensional and sexual beings is a top priority. And in an interview with Glamour published on Jan. 26, the actor spoke about how her character's sexual desires make the series feel more modern and empowering.

"In a lot of the Regency stuff we've seen in the past, we see a very composed woman," Dynevor said of the series' modern approach. (It does not get any more modern than a string quartet cover of Ariana Grande's "Thank U, Next.") "There's not much sexuality there. It's very much the male gaze." She added of Daphne, "I wanted to make her feel modern and have sexual desires, as women do, and have a lot going on that isn't surface level."

"That would have been awkward. I felt so safe in the knowledge that Lizzy was there," Dynevor continued. "I think it would have been a very difficult experience if Lizzy hadn't been on set protecting me and looking after me. No one wants to be told how to orgasm by a man."

Dynevor similarly recounted the show's sex scenes in an interview with Grazia Daily earlier this month, revealing that her past experiences have not always been as seamless. "It felt safe and fun. You choreograph it like a stunt, or a dance," she said. "It's crazy to me that that hasn't been there in the past." Dynevor added, "I've done sex scenes before that I can't believe I did. It was only five or six years ago, but it would not be allowed now."

The star also recently recalled an awkward encounter while filming a nude scene at a palace that did weekend tours for tourists. "We were filming on a Saturday one day, and I was not wearing much," she recounted on The Netflix Afterparty on Jan. 23. "It was summer, so me and Regé were sort of in robes and flip flops… I had my wig on, and I sort of look like the girl from The Ring when it's all down." Dynevor continued, "I ended up walking into a toilet with my robe and my hair down and looking pasty white, as I am. I gave a family of tourists the shock of their life. I think they thought they saw a ghost."