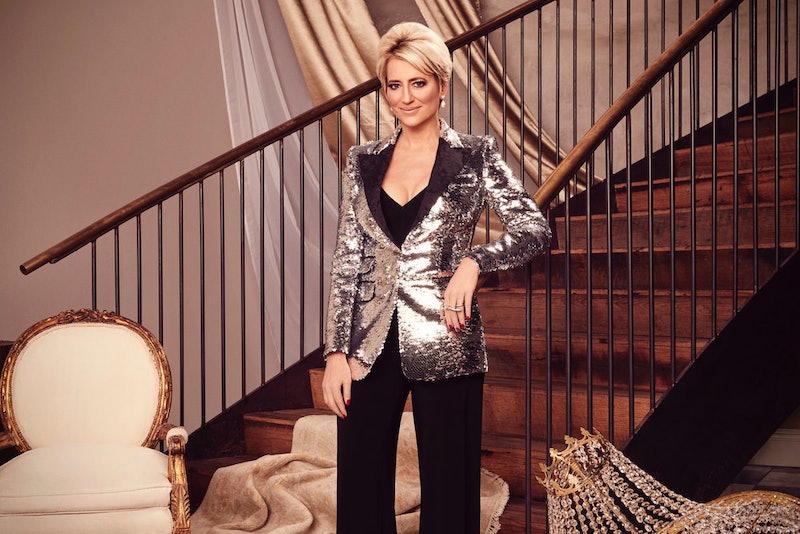 Dorinda Medley's departure from The Real Housewives of New York City came as a shock to viewers, who have been watching her "make it nice" since she joined the Bravo show during Season 7. The sudden news, which she announced on Tuesday, Aug. 25, also raises a lot of questions about why Dorinda left RHONY — or called "clip!" on her time on the show, as some Bravoholics would say. Rumors about her exit are running wild, with some claiming it was completely drama-free and others suggesting she might not have left of her own accord.

Bustle reached out to reps for Medley for comment, but did not receive an immediate response. Bravo had no comment on the story. However, a source close to production confirmed that the move was a mutual decision between Dorinda and production. Variety reported the same news, stating that "all agreed she needed a break."

However, there are rumors that Medley was actually fired from the series after six seasons. Entertainment Weekly reported that her departure could be due to her behavior throughout the latest season, which saw her breaking up with longtime boyfriend John Mahdessian. "Dorinda was very aggravated all season long and it was too difficult to work with her," a source told the outlet. The source continued, claiming that the Season 12 reunion, which was taped in-person just a couple weeks ago, was "the final straw" for Medley. "It's obvious she needs to work on herself," the source added. "The reunion was rough and she wouldn't acknowledge her bad behavior."

Medley herself did not give a reason for her departure when announcing the surprising news on Instagram, nor did she clarify whether she was fired or quit on her own terms. Instead, she simply paid tribute to her time on RHONY and showed gratitude to Bravo and her cast mates. "What a journey this has been," she wrote. "I have laughed and cried and tried to Make it Nice... But all things must come to an end." She also thanked Bravo and NBC "for the incredible ride," implying a peaceful exit.

Regardless of how the decision was made, Medley's fellow RHONY Housewives are fully supporting her. Ramona Singer, Luann de Lesseps, Leah McSweeney, Sonja Morgan, and even former star Bethenny Frankel, who shocked fans and co-stars with her own departure before Season 12, have all written tributes to Medley in light of the news. Hopefully, fans will see Medley welcome them back to her iconic Berkshires home for more girls trips in the Bezerkshires, whether or not she's on the show.

More like this
Everything To Know About 'RHONY' Season 14
By Jake Viswanath and Alyssa Lapid
Twitter Is Saying The Same Thing About Jill Scott Winning 'I’m A Celeb'
By Sophie McEvoy
Everything To Know About Danna Bui-Negrete From 'RHOSLC'
By Jake Viswanath
The First Trailer For 'That '90s Show' Includes So Many Nods To The Original Series
By Jack Irvin, Alyssa Lapid and Grace Wehniainen
Get Even More From Bustle — Sign Up For The Newsletter