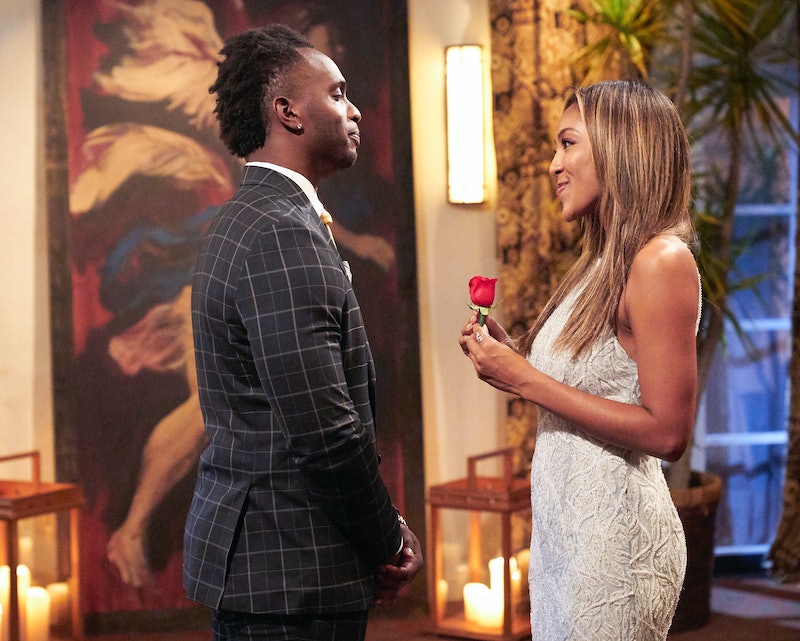 No one saw that coming. When Eazy left The Bachelorette resort for his one-on-one date with Tayshia, the guys were sure he would return with a rose. But Tayshia shocked them all by sending him home before their date ended, and Eazy himself was just as surprised.

The pair went ghost hunting (because that's what people do on first dates) before settling down for dinner and a heart-to-heart. Eazy was clearly exhilarated by Tayshia's presence and made it clear in confessionals that he was falling in love. He was also open about his feelings with her, but when Tayshia reached for the rose, it wasn't what he was expecting to hear.

"I can't give you this rose," she said, hanging her head. “I’m not where you’re at… and I’m not sure I will get there." Eazy was speechless. She tried to do him a favor by sending him home then rather than at a rose ceremony with no explanation, but that didn't make the breakup any easier.

Then came the famous last words: "Can I walk you out?" Eazy mustered a, "Yeah," and stumbled up from his seat to follow. “Tayshia is this real?" he asked. "Yeah," she replied. "Are you sure?” he asked again. "I am," she said with confidence.

When the guys watched Eazy's luggage get carried out of their room, they all audibly gasped. Some found his exit unsettling, whereas others (namely Ben) called it a confidence boost — one less guy to compete with. Regardless of what they think, though, the elimination was definitely a power move on Tayshia's part. She clearly knows what she wants and she's not wasting any time.