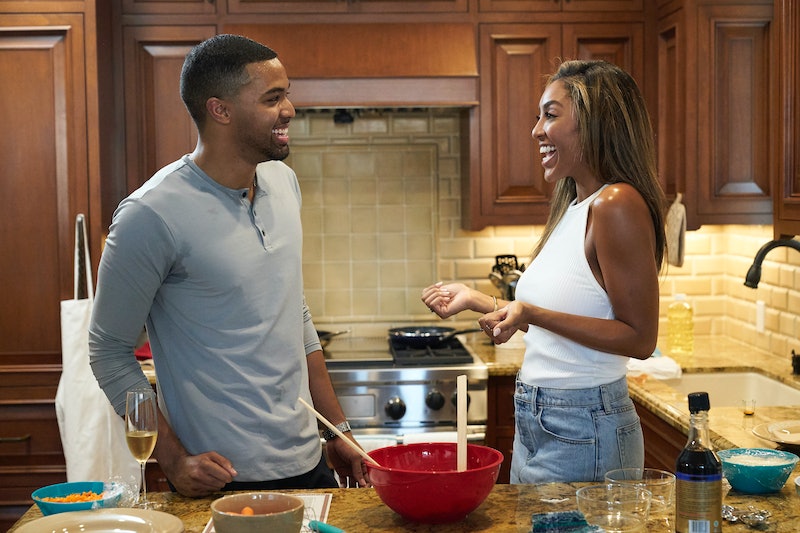 Of all the breakups on The Bachelorette, Tayshia and Ivan's had to be one of the most confusing. After Ben's dramatic return to the show, Tayshia suddenly sent Ivan home right before the rose ceremony, vaguely explaining that their religious differences were a deal-breaker. "This past week we talked about some important subjects," Tayshia told Ivan after pulling him aside, adding that she now had some "concerns" about their relationship.

"I wish I could say that there were a lot of red flags prior to this week, [but] it’s just that at the end of the day religion is an important part of my beliefs," she continued. While Ivan said he understood — even admitting that he knew it would be a "roadblock" in their relationship — it wasn't something the two had talked about on camera, and neither Tayshia nor Ivan shared what exactly their differences were.

"Unfortunately, there are just some things that our future didn’t align on," she told the remaining two men, Ben and Zac, about why she sent him home. "He’s an amazing guy, but I think this is the best way for us." Suffice it to say Twitter had a few questions about what happened:

As some dedicated viewers pointed out, Tayshia and Ivan did mention that they spoke about "important subjects" like religion during their fantasy suite date, so it seems like the conversation took place after the cameras were packed up for the night. Still, they both appeared to be in a good place the morning after that date, so it seems like Ben's sudden return forced Tayshia to reconsider what she really wanted in a potential husband.

Thankfully, fans will be able to get some answers soon; amid the finale, Kaitlyn Bristowe tweeted that she would be interviewing Ivan about the breakup on her podcast, Off the Vine. "Good news is.... IM PODCASTING WITH HIM TONIGHT. So we will get to the bottom of this," she wrote, encouraging fans to submit any additional questions they had for him ahead of the episode.

In the meantime, everyone will just have to make do with Ivan's (vague) comments about the end of his relationship with Tayshia as his car drove away from La Quinta. "I knew in the back of my mind, this could be the bomb that explodes everything here. And it just happened," he said. "This is definitely gonna sting for a while, for sure. You don’t just fall out of love overnight."