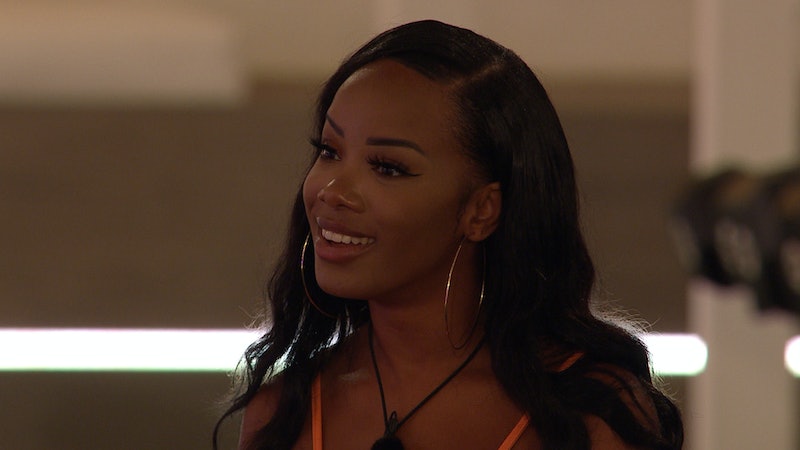 When Rachel Finni entered the Love Island villa on Friday night, with the fate of two male contestants in her hands, it absolutely felt like the twist this series needed. Brad and Chuggs, who so far had shown interest in the show’s white contestants (specifically Faye and Chloe), suddenly needed the help of an unambiguously Black woman to stay on the island.

The irony was pretty sweet, I’ll be honest. Black Twitter playfully called it “reparations” and likened Brad and Chuggs’ impending efforts to woo Rachel to black square activism. There was something about it that felt like poetic justice – and Rachel seemed to be handling it all with cool, calm confidence. She seemed like she knew her worth.

Inevitably, however, my celebration quickly turned to concern. Rachel’s initial interactions with Chuggs – the posh-boy contestant who owns a bucket hat business – immediately felt off. He repeatedly described her as “feisty” and quickly characterised her entrance into the villa as a sassy stomp when, in reality, she was simply existing. To me, the entrance had actually exuded sweetness, with Rachel laughing nervously and exclaiming how “awkward” the situation was. In fact, the entrance was so endearingly clumsy, it was meme-ified within minutes.

Chuggs misjudging his crude stereotypes as compliments signalled to me that he had barely even interacted with Black women on the outside world, let alone desired or dated them.

Since entering the villa, Chuggs has made it clear that his “type” is petite and blonde, which is – of course – code for “white.” This made his interactions with Rachel feel horribly disingenuous. To make matters worse, Chuggs misjudging his crude stereotypes as compliments signalled to me that he had barely even interacted with Black women on the outside world, let alone desired or dated them.

I have dealt with these kinds of interactions my whole life, with people’s expectations of how I’ll be shaping how they act with me. One white man at university once told me he was surprised I was so calm and quiet, having thought when he first met me that I’d constantly be shouting “braaaap!” loudly, posing my fingers as a gun. I didn’t know how to react.

Even in the workplace, my assumed “sassiness” has led people to think I’m confrontational and aggressive, despite not having a track record of behaving that way. Once, when I was negotiating a piece with another non-white writer, our colleague remarked that they didn’t want to get in our way as they were “too scared to with women of colour.” The implication was that we would both be too angry. And I can’t count how many times social media trolls have been ready to label me as “the angry Black woman.”

The irony of what’s happening on Love Island is that many of the men in the villa are ready to appreciate the Black aesthetic on white women. Darkly tanned skin, lips inflated with filler, and a bigger bum are often deemed as extremely desirable – except on Black women who naturally possess them. Even Brad, who kept saying he “preferred dark features,” seemed unable to vocally say the word “Black,” despite appearing to have a genuine attraction to Rachel. In other words, in the rare instances where appreciation of Black women actually exists on Love Island, it can’t even be said out loud.

Why do the producers of Love Island consistently throw Black women into these situations, clumsily ticking a diversity box rather than doing anything meaningful to curate an environment that appreciates and deserves them?

What’s striking is that these kinds of issues are nothing new on Love Island. We’ve seen Black women gaslit and be ignored many times before. We already know before the dreaded first coupling up that the Black woman will be picked last – especially if she’s dark skinned. Why do the producers of Love Island consistently throw Black women into these situations, clumsily ticking a diversity box rather than doing anything meaningful to curate an environment that appreciates and deserves them? Similar shows such as Netflix’s Too Hot to Handle have managed to find men who do desire a diverse range of women. Yet in Love Island, it’s always the same old tired statement: “I prefer blondes.”

I’ll have my fingers crossed for Rachel – she’s clearly savvy and seems to be going after what she wants – but I also won’t be surprised if she meets the same fate that most Black women on Love Island do.

More like this
Wait, Is Maya Jama Confirmed To Host 'Love Island'?
By Sophie McEvoy
Molly-Mae Hague & Tommy Fury Celebrate Pregnancy Reveal In The Sweetest Way
By Sophie McEvoy and Sam Ramsden
What Exactly Is The Bish & Chips Show?
By Frances Stewart
Pro Footballer Zander Murray Is "Blown Away" By Support After Coming Out
By Sam Ramsden
Get The Very Best Of Bustle/UK