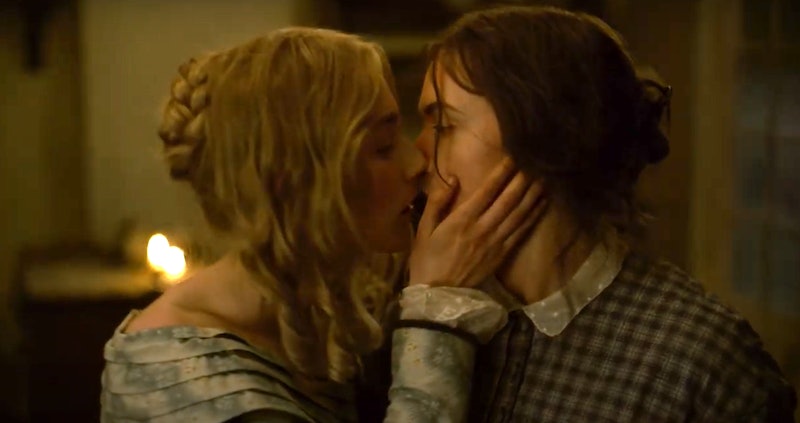 Paralleled to the queer period romance Portrait of a Lady on Fire, director Francis Lee’s Ammonite tells the story of fossil collector and paleontologist Mary Anning (Kate Winslet) and her life-changing romance with Charlotte Murchison (Saoirse Ronan) in 17th century England. And, as it turns out, on top of playing the leads in the film, actors Kate Winslet and Saoirse Ronan also choreographed their own sex scene in the upcoming drama.

Winslet detailed how she and Ronan worked together to create the safest, and most elegant love scene they could in a cover story with The Hollywood Reporter published on Wednesday, Aug. 26. In it, she expressed the pride that came from orchestrating Ammonite's intimate scene with Ronan, calling it “by far the least self-conscious” experience she's had in a love scene (and she's done plenty).

"Saoirse and I choreographed the [love] scene ourselves," Winslet said. "It’s definitely not like eating a sandwich. I just think Saoirse and I, we just felt really safe." While the director had been “naturally very nervous," Winslet decided to take charge, telling him, "'Listen, let us work it out.'" She continued, "And we did. 'We’ll start here. We’ll do this with the kissing, boobs, you go down there, then you do this, then you climb up here.'"

According to the Oscar winner, she and Ronan worked together and “marked out the beats of the scene so that we were anchored in something that just supported the narrative." And, out of all the love scenes she's ever done (see: Titanic, Little Children, etc.), this one was her favorite. “I felt the proudest I’ve ever felt doing a love scene on Ammonite," she said.

This isn’t the first time the actor has choreographed her own love scenes. In 2017, Winslet revealed that she directed her love scene with Idris Elba in their romantic drama The Mountain Between Us. While promoting the film on The Graham Norton Show in October, the actor said that director Hany Abu-Assad and Elba had both been at a loss on how to tackle an intimate scene scene, prompting her to step right in to take the reins. “[Filming] was moving quite slowly so I’m like, ‘Look, we need to start filming this [love scene], what’s with all this chat?’” she recounted. After Abu-Assad and Elba voiced their concerns, Winslet snapped into action: "'OK! Put the camera over there, and we’re gonna do this and we’re gonna do that.'"

More like this
Twitter Is Identifying With Sally Field & Jane Fonda’s Friendship In New Viral Video
By Jake Viswanath
12 Years Ago, Austin Butler Manifested His Oscar Nom In This Disney Movie Scene
By Jake Viswanath
North West Will Make Her Acting Debut Alongside Mom Kim Kardashian
By Radhika Menon
Here’s Everything Coming To & Leaving Netflix In February
By Jake Viswanath
Get Even More From Bustle — Sign Up For The Newsletter