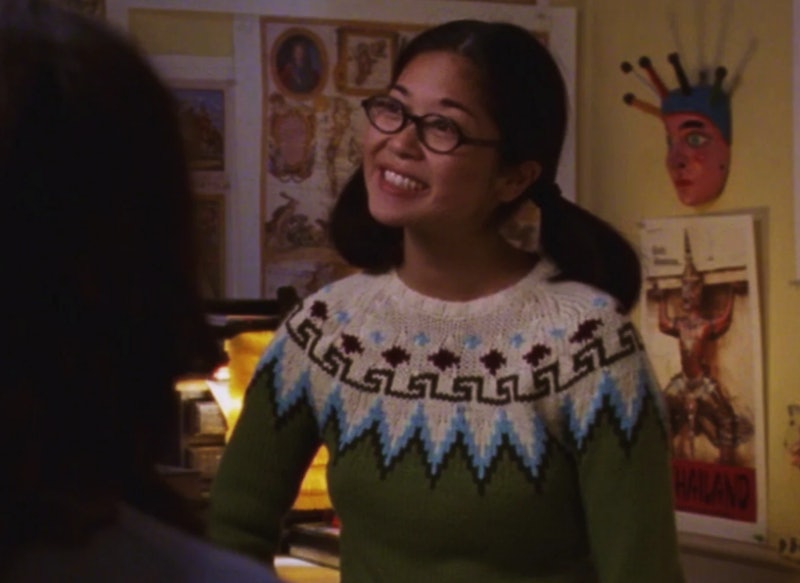 As a teenager growing up in a small New England town much like Stars Hollow, I was obsessed with Gilmore Girls. I loved the fast dialogue, the witty references I didn’t understand, and the interesting characters that inhabited this world. Most of all, I loved Rory Gilmore. Like me, she was bookish, quiet, and driven. It was easy to see myself in her, and it didn’t take long for me to idolize her. If this sounds self-centered, well, take a look at who my role model was. When I was younger I didn’t see all of Rory’s character flaws. If I had, maybe I would have stopped looking up to her and seen the person standing right next to her: Lane Kim. Because now, all these years later, I really wish I had looked up to Lane instead of Rory.

Throughout the series, which ran from 2000 to 2007, Rory always strived to be perfect. She wanted to earn the best grades, to get into the best college, and to have the best job. And while there's nothing wrong with being driven, her motivation came from a place of vanity. She seemed more concerned with how the world viewed her than with what was actually making her happy. Yes, Rory wrote for her school newspaper in high school because she loved it, but many of her other extracurriculars were done to appeal to colleges. In the Season 2 episode "Hammers and Veils," Rory volunteered with an organization building houses for the underserved, not because she was passionate about helping people, but because she wanted to put it on her college applications. And in Season 3, she spent her senior year as the student council vice president even though it made her miserable.

Lane, on the other hand, never seemed to care much about impressing others. She did things she was actually passionate about. She cared deeply about music and taught herself how to play the drums. She even joined the high school marching band, despite the embarrassing uniform, to find an outlet for her passion. She wasn’t learning an instrument or wearing a feathered-cap just so she could put it on her resume.

Lane always knew what was important to her and she poured her heart into it. And, looking back, I wish I had followed her lead. Instead, I’ve often found myself thinking more like Rory and making decisions for the sake of appearances. Looking up to Rory made me think it was important to do what I was “supposed to do” without stopping to think about what I actually wanted to do. I’ve applied to jobs I didn’t actually want just because I knew it would impress other people if I landed it. And though I didn’t choose to study journalism solely because of Rory, she was definitely an influence. Even though I love writing, I sometimes find it hard to do if I’m not making money or getting a good byline.

There's nothing wrong with wanting to be the best you can be, but feeling entitled to being the best is a recipe for disaster. Rory didn't want to be the best journalist she could be — she wanted to be the best journalist, period. At the end of Season 5, when Mitchum Huntzberger told her she didn’t have what it took to be a journalist, Rory stole a boat, dropped out of school, and gave up the career path entirely. All because one man told her she didn't have what it takes. And later in Season 7, she was so certain she’d get the New York Times fellowship, she passed over a great job at a smaller newspaper as if it were nothing. Revisiting these seasons, it makes me wonder, did she ever really want to be a journalist?

Lane, however, never acted entitled. She worked hard to assemble a band, Hep Alien, found time and space to practice, and booked gigs. And when they had the chance to play in front of a label, she never once assumed they’d get signed just because they were good musicians. She was humble and hardworking, and never quit when she or the band faced setbacks.

I followed Rory's footsteps into journalism so that I could write, but sometimes I wish I had gone a more creative route, one that felt more true to what I love. If I had looked to Lane for guidance instead of Rory, maybe I would have taken classes in fiction writing or learned about graphic design or video editing. Or maybe I would have created my own opportunities and started a magazine or a YouTube channel.

I wish I had looked up to Lane as a role model instead of Rory, but most of all, I wish that Lane had gotten more credit from the show itself. Lane was easily one of the most interesting and most complex characters on the show, and she makes the perfect role model. She’s a great friend and bandmate, and she’s independent and innovative. She had to work to get what she wanted, whether it was playing a gig, buying a CD her mom wouldn’t approve of, or dating a guy she really liked. She was smart and creative, and also knew when to ask for help.

Mostly, though, Lane was resilient as hell. Growing up in an oppressive household with a mother like Mrs. Kim was difficult, plus she was forced to go to a religious college that upheld sexist standards. But, through it all, she never lost her sense of self.

While Lane had her flaws, just as Rory had hers, she was so much more interesting than the show's main character — something I, as well as the show’s creator, Amy Sherman Palladino, and the series' team of writers, failed to realize. I wish they would have made Lane’s storyline more prominent and realized how interesting it would have been to get more of her perspective. Lane deserved better than to get pregnant in Season 7 and have her unplanned twins play mostly for laughs. She deserved better than her arc in the revival, which gave little update on how she was actually doing (though it did provide some nice details about Hep Alien).

Lane was way more than a quirky best friend, and I regret that I didn't realize it sooner. She was badass rock ’n’ roller who was passionate about her friends and her art, and she didn't give into societal pressure. She knew who she was and she owned it, and as I rewatch the show as an adult, I’m striving to follow in her footsteps.