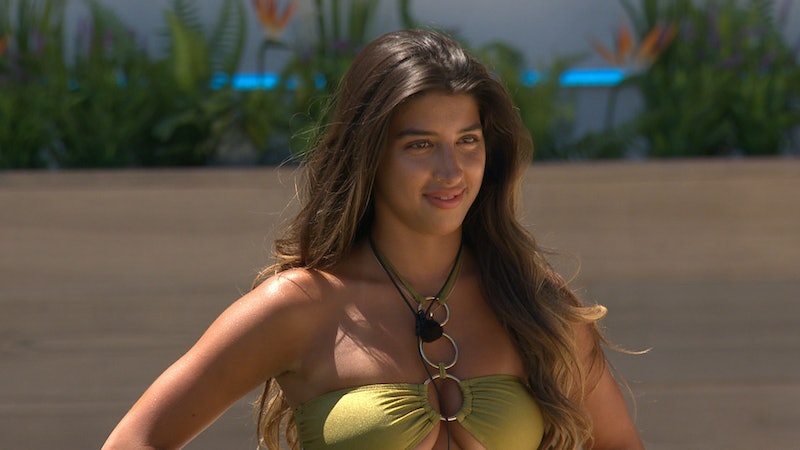 Love Island is back — and I for one am thrilled. I can’t wait to see a leggy blonde in a bodycon dress pull a semi-professional footballer for a “chat” to try and “turn his head.” Or for a self-professed “girl’s girl” to jab a baby pink acrylic nail at a man with washboard abs and accuse him of mugging off her best mate. Or for a 6-foot-4 scaffolder to tell an Instagram influencer over the purr of a hot tub that he’s “falling” for her. I love Love Island!

But all the things I loathe about the show are back in full force, too. Since Season 1, South Asian representation has been woeful. Season 2’s Malin Andersson is half-Swedish, half-Sri Lankan and Kaz Crossley, a Season 4 contestant, has Thai heritage, but aside from them, the show has seen almost no other female contestants of South Asian descent.

I’m sure I’m not alone in saying that, usually, Love Island makes me feel pretty bad about myself because I don’t adhere to the unrealistic body standards and I don’t have hair as shiny as a glob of molasses. Sure, in reality, I know that most people don’t look like the contestants, but watching an hour of Love Island every day for two months makes me prone to believing that I’m the anomaly.

Coming to terms with the body standards is one thing, but reckoning with the idea that I’m not good-looking because I’m not white is another.

But this feeling is made worse by the fact that the show hardly ever features brown women. Coming to terms with the body standards is one thing, but reckoning with the idea that I’m not good-looking because I’m not white is another.

Because, if Love Island is a show for hot people, then their exclusion of brown women plants a subconscious, self-hating seed in my brain: Brown women like you aren’t hot. It’s an illogical thought, and I know deep down it’s not true — but it’s difficult not to feel unattractive when you’re watching a show reserved exclusively for hot people and no one even remotely resembles you.

Enter Shannon Singh. Shannon waltzed into the villa donning an olive green bikini while her VT rolled, saying she was “confident in [her] own skin.” “Oh my god, she’s stunning,” Liberty crooned as Shannon made her entrance. Then came the tweets: “I can’t believe Shannon isn’t the bombshell tbh? Whoever couples up with her is never letting go,” wrote one viewer. “I think we ALL fancy Shannon,” said another. It was like a switch clicked in my brain: She’s brown and hot — so you can be brown and hot too!

Let’s be clear: I do not really look like Shannon. I do not have an immaculate, blow-dried balayage; I do not have eyes that look like pools of honey; nor do I have an *ss that resembles the peach emoji. If I click-clacked into the Love Island villa I would not get an only-half-joking love rival asking me to “leave, please.”

But out of Liberty, Faye, Kaz, Sharon, and Shannon, it’s indisputable that I resemble Shannon the most. Due to our shared South Asian heritage, Shannon and I both have similar face structures; the same natural hair colour; and an identical complexion.

As a child and teenager, I rarely saw South Asian women represented on TV or in films. I have no doubt that the depiction of fairy-tale princesses as blonde-haired and blue-eyed is partly why I grew up convinced I was ugly. Many of the shows I watch as an adult — including Love Island — have only added to this notion, so seeing Shannon strutting into the villa on Monday really was a breath of fresh air.

Of course, Love Island’s problem with South Asian representation cannot be solved with one contestant alone. Nor can its larger race problem, which has seen viewers witness the fetishisation of mixed-race islanders and the blatant discrimination against dark-skinned Black contestants. In episode one of this season alone, we saw Jake saying he preferred “blond hair and blue eyes” (read: “not women of colour”), a discussion around where Kaz was “from,” and both Toby and Kaz being left out of the initial coupling up (an issue that deserves careful attention from producers, considering it follows a pattern we see year in, year out). There is even a question mark around Shannon’s own attitude toward Aaron, which could have deeper implications.

Of course, Love Island’s problem with South Asian representation cannot be solved with one contestant alone.

Racism and colourism are problems that both precede and supersede Love Island. Although the contestants are isolated for the duration of the show, their behaviour will always be influenced by what they’ve learned on the outside world. Love Island’s producers will not be able to solve society’s problems with discrimination, but they could do more to protect their contestants. I’m happy to see Shannon thriving but I look forward to the day when every nonwhite Love Island contestant is doing the same.