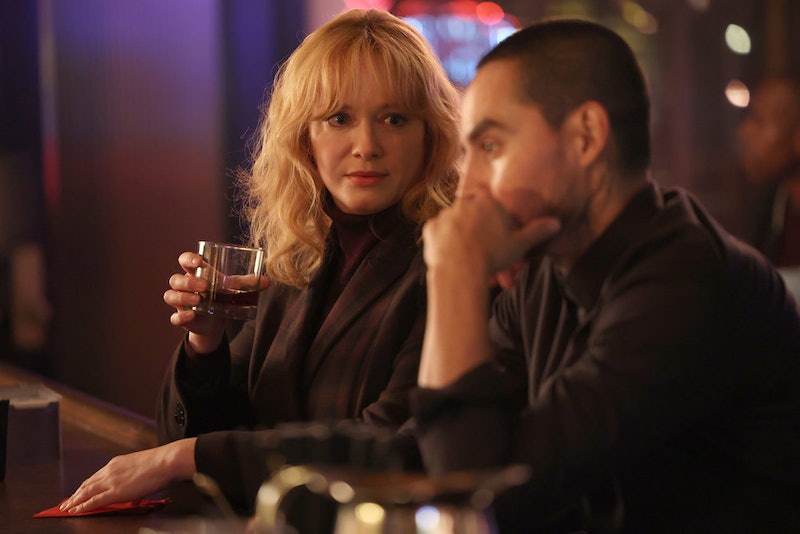 Spoilers ahead for the Season 4 premiere of Good Girls. Good Girls is back, and the tables might finally be turning in the girls’ favor.

Throughout the show's third season, Beth, Ruby, and Annie struggled to get their criminal enterprise out from under Rio’s control. Beth in particular was in danger of being framed for murder, given that Rio had tricked her into putting her fingerprints on the gun used to kill Lucy. In Season 4, Beth is understandably on edge as she fights to gain some power in the situation. But by the end of the Season 4 premiere, "One Night in Bangkok," she’s got it: Rio's fingerprint on a sheet of counterfeit bills.

While it's not the first time Beth has held sway over Rio, the fingerprint is damning enough that it should prevent him from turning the gun over to the cops. That threat of mutually assured destruction could be the thing that finally puts them on the same side, allied against other threats. Showrunner Jenna Bans has said that was her aim for the end of Season 3, before production was halted amid coronavirus.

"The last five [Season 3 episodes] were really going to take us in a new direction,” Bans told Entertainment Weekly last May. "We were going to, and still will in the opening of Season 4, throw them into putting that adversarial weaponry aside and having to begrudgingly work together in a way that they haven't before."

Rio and Beth's relationship has, of course, been through plenty of ups, downs, and everything in between — including the perpetual sexual tension between them. The two haven’t slept together since Season 2, after Beth shot Rio three times. But plenty of fans are still hoping that they'll rekindle things, and the cast and crew have confirmed that there will always be some feelings there.

"[There's] a huge cat-and-mouse game between Rio and Beth and I feel it makes really good TV because they are both one-upping each other," Manny Montana, who plays Rio, told The Neil Haley show ahead of the Season 3 premiere last year. "It's weird because opposites attract. So they both dislike each other, but love each other at the same time, so it just makes for a really complex relationship."

With Beth and Rio forced to finally actually work as a team, Bans says it’s possible the strength of their bond will find them drawn together again. "That chemistry is not something that can be snuffed out, so it brings up all of that good stuff, them working in such close proximity," Bans said. "You don't go from having the hottest sex of your life to wanting someone dead without conflicted feelings."

More like this
The 'Gossip Girl' Reboot Creator Is “Looking For A New Home” To Air A Potential Season 3
By Brad Witter
Shaq Might've Spoiled His Relationship Status With Kirsten After 'MAFS'
By Brad Witter
The 'Freeridge' Cast Shared Their Hopes For A Potential Season 2
By Grace Wehniainen
Netflix Shut Down 'Bridgerton' S3 Rumours About A “Very Dark” Storyline
By Bustle
Get Even More From Bustle — Sign Up For The Newsletter
From hair trends to relationship advice, our daily newsletter has everything you need to sound like a person who’s on TikTok, even if you aren’t.