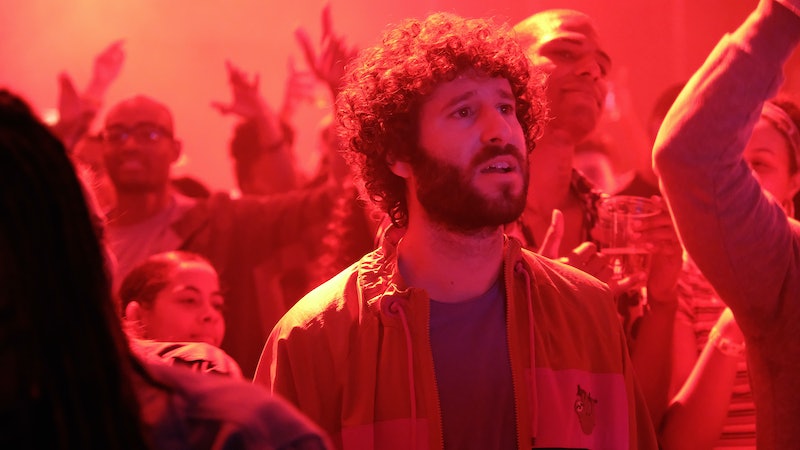 For a show whose promotional poster features star Dave Burd poking out of a gigantic pair of briefs (his rapper name is Lil Dicky, after all), the FXX show Dave has been surprisingly well received by audiences. And while Dave Season 2 hasn't been greenlit just yet, it's probably just a matter of time. Per Deadline, Dave is the most-watched FX show since Atlanta, with an average 4.8 million viewers per episode. As a result, Deadline expected Dave to be renewed as soon as the television industry bounces back from its coronavirus-related delays.

The semi-autobiographical series follows Burd as he tries to make it as a rapper under the alter ego Lil Dicky (also his real-life nom de plume). And while Dave may have initially sounded like a flimsy show premise, many viewers (and critics, although its reviews were still middling) were surprised to find how funny it actually was. In Season 1, Burd's character suffers from explosive diarrhea in the woods, rubs shoulders with famous musicians, and makes plenty of dick jokes. A particular breakout is GaTa, who is Burd's hype man both in the show and real life, according to Uproxx.

However, Burd eventually wants to move beyond his alter ego — both in the Dave universe and in his career. "I'm 31," he told Variety. "No one's going to care about listening to me rap at 42 years old." He continued these sentiments in an interview on Grammy.com, saying that his rap career will likely expire before his acting career will. "I just think the second half of my life I think will be primarily acting," he told the music site, going on to explain that this truncated timeline has motivated him to "prioritize rap even more... because I know that I only have so many years of being able to be relevant in that space."

Burd told Variety that he hadn't yet figured out how often he wanted to make new seasons of Dave but mentioned he wanted to balance it with his music career (he hopes to release his second album by the end of 2020, according to The Wrap). And since Burd said in the same Variety interview that "Season 1 is all about getting legitimacy and going from being this YouTube sensation to people actually taking me seriously," it stands to reason that a second installment would follow Burd's upward trajectory.

But if his TV career doesn't pan out, Burd has a backup plan: playing for the NBA. "That's not ruled out yet," he jokingly told the New York Times. "I definitely train twice a week so we'll see — I'm a never-say-never type of guy."