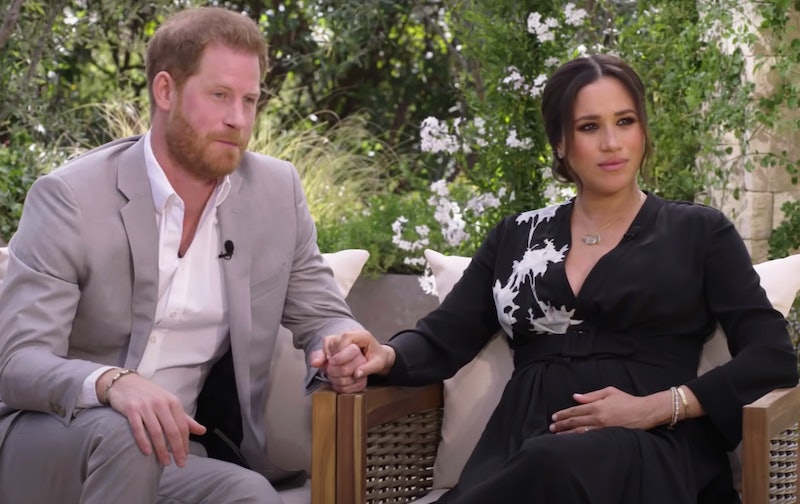 On Valentine’s Day 2021, Prince Harry and Meghan Markle announced that they were expecting their second child, and now Lilibet Diana Mountbatten-Windsor is finally here. The Sussexes welcomed Lili “with great joy” on Friday, June 4 in Santa Barbara, California. Though the newborn is named for two beloved royals — her great-grandmother Queen Elizabeth II and her grandmother Diana — she doesn’t have a title herself, and the reason why is a little complicated.

Before Lili’s birth, it seemed unlikely she’d be given a title. For one, her older brother, Archie, doesn’t have one. The popular belief was that the Sussexes’ had chosen to forgo it, but the couple revealed in their bombshell primetime interview with Oprah Winfrey that that wasn’t the case. Meghan claimed that it was the Royal Family who didn’t want to grant Archie a title.

“They were saying they didn’t want him to be a prince or princess, which would be different from protocol, and that he wasn’t going to receive security,” Meghan said. She added that it was disconcerting that “the first member of colour in this family isn’t being titled in the same way as other grandchildren would be”.

Archie’s full name is Archie Harrison Mountbatten-Windsor, honouring both the Queen’s and Prince Phillip’s last names. Although theoretically, “as a younger child to the Duke of Sussex, the new baby would normally have the title of Lord or Lady”, royal historian Carolyn Harris predicted to Town & Country that their second child would follow the same naming convention. That is, “First and Middle Name” Mountbatten-Windsor, which we now know proved correct.

However, things could change for the two Sussex children when Harry’s father, Prince Charles, ascends the throne. This would make Archie and Lili the grandchildren of the reigning monarch, which means they become automatically eligible for royal titles. This rule exists due to the Letters Patent issued by King George V in 1917, which means children of the sovereign and grandchildren in the male line are entitled to the HRH designation.

Still, things may change — it’s possible that a new Letters Patent might be issued by Prince Charles, effectively restricting the royal designation to the heir and their immediately family. Harris explains that “the trend in the 21st century royal family is toward fewer members of the monarch’s family holding royal titles and becoming full time working members of the royal family”. This may well mean that the Sussex children are unlikely to undertake official royal duties or inherit titles, which is in keeping with what we’ve seen with Archie so far. All remains in the air however, so we’ll keep you updated.